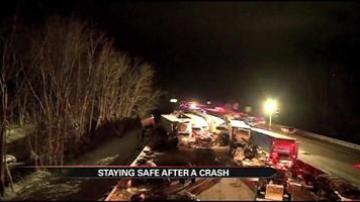 LAPORTE, Ind.-- White out conditions on Interstate 94 caused a massive pile up and left three people dead Thursday night. As the snow continues, police are asking that drivers move aside so they can get to crash victims.

If you find yourself stuck in a major accident, police are asking that you only help the victims if you have a medical background.

Sergeant Ryan Schoonveld said if you get out of your car, you risk getting hit by a sliding vehicle.

Schoonveld said, “The safest place is in your car with your seatbelt on. Now in the situation last night in Michigan City, I’m not sure there was any safe place at that particular spot.”

Schoonveld said from his experience responding to wrecks on I-94 it's not safe to get out and walk on the slippery freeway.

Schoonveld said, “If you can get away, as far away as possible, that’s your best bet. But a lot of the time in a white out condition like they had last night, there’s really no where to go, so staying in your car with your seatbelt on is your safest place.”

This month two state troopers were in a similar situation on I-94, and if they hadn't buckled up and stayed in their car, they could have been injured or even died.

Schoonveld said, “They were on the median side in their patrol vehicle with their seatbelts on filling out the accident report for a semi that was jack-knifed, and another semi jack-knifed behind them.. hit the patrol car… pushing them into the wrecker that was pulling the other semi out of the ditch.”