What we know about Texas church shooter Devin Patrick Kelley 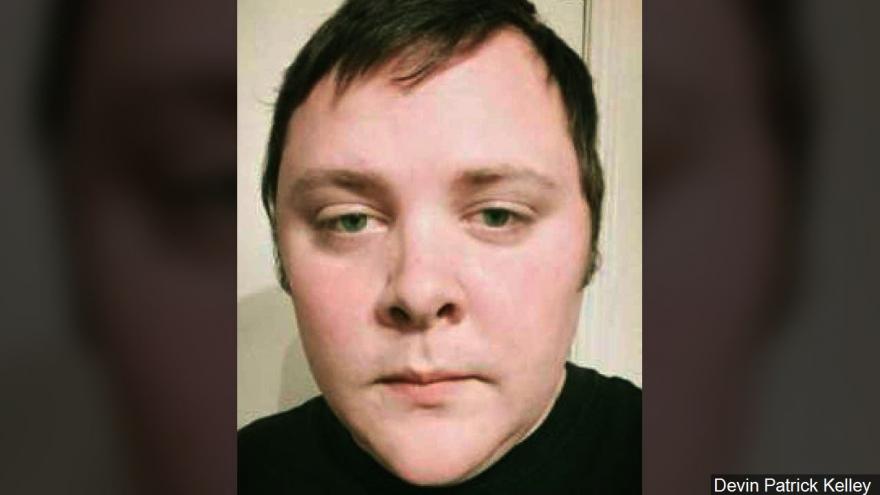 (CNN) -- In retrospect, the warning signs were there.

Before Devin Patrick Kelley carried out the deadliest mass shooting in Texas history on Sunday, the former airman had assaulted his wife and stepson on multiple occasions, according to the US Air Force. The assaults took place between 2011 and 2012, and as punishment he received a bad conduct discharge, 12 months in a military prison and a reduction in rank.

In 2014, a neighbor at a Colorado RV park told police he saw Kelley beat a dog. Kelley denied the allegation and was cited for animal cruelty.

Kelley was obsessed with a family dispute and sent threatening text messages to his mother-in-law, investigators said. Social media posts suggest a fascination with guns and mass shootings.

As investigators piece together a portrait of the dead gunman, questions remain about what set him off and what possibly could have been done to prevent the massacre.

'Someone really dropped the ball'

Kelley's record of domestic violence alone should have barred him under Texas law from purchasing the gun he used to kill 26 First Baptist Church parishioners in Sutherland Springs. His victims include his grandmother-in-law and the 14-year-old daughter of the church's pastor, and they range in age from 17 months to 77 years old.

The Air Force acknowledges it did not appropriately relay Kelley's court martial conviction for domestic assault to civilian law enforcement, preventing it from appearing in the federal database that licensed gun dealers are required to check before selling someone a firearm. "Had his information been in the database, it should have prevented gun sales to Kelley," the Air Force said in a statement.

Two handguns were found in the shooter's vehicle. A Ruger AR-556 rifle was found in front of the church where Kelley dropped it when a local resident rushed him. Stephen Willeford, who lives near the church, shot Kelley twice before Kelley fled the scene in his car. Kelley, 26, was found dead in his car a few miles from the church. He had shot himself in the head.

At one point, the shooter tried to get a license to carry a gun in Texas but was denied by the state, Texas Gov. Greg Abbott said, citing the director of Texas' Department of Public Safety.

"So how was it that he was able to get a gun? By all the facts that we seem to know, he was not supposed to have access to a gun," Abbott told CNN. "So how did this happen?"

Kelley served in logistics readiness at Holloman Air Force Base in New Mexico from 2010 until his discharge for assaulting his wife and stepson.

Kelley initially faced multiple charges in his 2012 court-martial, according to records reviewed by CNN. He was originally charged with assault and battery against his wife, aggravated assault against his stepson, and four charges involving firearms, including two charges of pointing a loaded firearm at his wife and two charges of pointing an unloaded firearm.

As part of his plea, Kelley admitted to hitting his stepson on the head and body "with a force likely to produce death or grievous bodily harm." The injuries lead to internal bleeding and fractures in the child's skull, Christensen told CNN.

Kelley also admitted to repeatedly hitting and kicking his wife, choking her and pulling her hair.

The nature of crimes suggested a propensity for violence that should have been taken more seriously, Christensen told CNN.

In June, Kelley was registered as a noncommissioned security officer, affiliated with Schlitterbahn Waterpark and Resort in New Braunfels, where he lived, according to the state Department of Public Safety. In order to complete the registration, Kelley would have submitted fingerprints and fees.

Kelley worked at the waterpark for five and a half weeks this summer as a seasonal unarmed night security guard before he was terminated, Schlitterbahn Corporate Communications Spokesperson Winter Prosapio told CNN.

CNN has asked why Kelley was terminated and has yet to hear back.

Whether Kelley had any religious affiliation is unclear. The First Baptist Church of Kingsville, two hours south of Sutherland Springs, issued a statement saying that, while Kelley was not a member of the church, he volunteered one night during the congregation's 2014 Vacation Bible School.

Robert Gonzalez, who lives near Kelley's residence in New Braunfels, about 35 miles north of Sutherland Springs, said he heard gunfire coming from Kelley's property every morning while he was working out on his porch last week.

"A load of rounds that would always be going off this time," he told CNN. "A .45 to an assault rifle, like a rapid fire all of a sudden. I was concerned because it was so close to our house."

It's not unusual for people in the area to practice firing on targets, said Gonzalez, who can identify guns by their sound because he served in the armed forces.

But this was an unusual amount of gunfire, he said.

CORRECTION: This story has been updated to correctly identify the official who described domestic issues between the gunman and his family. It was Freeman Martin of the Texas Department of Public Safety.