Where are all the salmon? 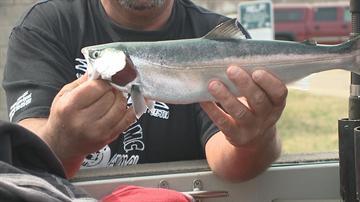 BENTON HARBOR, Mich. - Where are all the salmon? That’s the question being asked right now among Lake Michigan’s fisherman.

Usually in March, Berrien County’s coast is becoming a salmon haven for fisherman. Not this year.

It’s a good day to fish for William Parker. Parker sat on St. Joseph’s pier Monday with three others and caught about three fish an hour. The fish Parker was catching weren’t the type he was hoping for this spring.

“I didn’t get my salmon stamp this year,” he said. “It didn’t seem like there were that many. Parker heard about the poor salmon fishing in Lake Michigan and opted to not even try.

“I don’t think anyone knows where they are,” said Pete McCarty, from Battle Creek, who came to Southwest Michigan Monday just to catch salmon. McCarty considers himself lucky. Between him and his two buddies they spent five hours fishing and caught two salmon.

McCarty remembers March salmon fishing in years past. “Typically,” he said. “Two guys would come down and catch five or six fish in a couple of hours.”

The Michigan DNR post in Plainwell told ABC 57 News Monday that fisheries are about a month ahead of normal years thanks to the mild winter. They suspect salmon populations have migrated either North in Lake Michigan or to deeper water.

For fisherman like Parker that means no salmon at all this year which is a shame. “Especially the price of them in the store it’s pretty high,” he said. The salmon he’s used to catching in March is usually pretty good eating.