Who is James Comey: 7 things to know about the FBI director 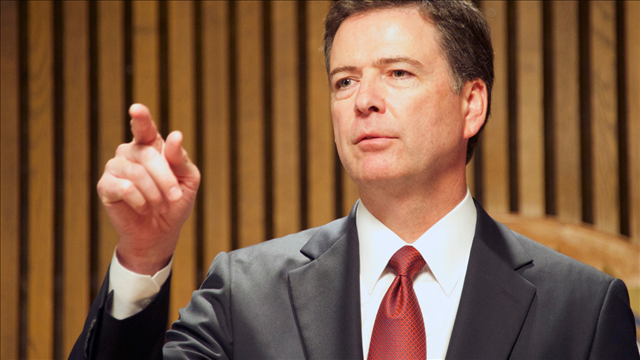 FBI Director James Comey's announcement Friday that the bureau would investigate more emails potentially related to Hillary Clinton's private server sent a jolt through the political world, setting off alarm and anger among Democrats who worry the news could swing the election to Donald Trump.

It remains unclear whether the emails are new or pertinent to the probe Comey had ended months ago. But the decision to go public with his renewed interest has enraged the Clinton campaign, which called Comey's letter to congressional leaders "long on innuendo and short on facts." Clinton, at an event Saturday, in Florida questioned his timing, saying she found it "deeply troubling."

In July, Comey invited scorn from Republicans when he made public his office's initial decision not to recommend charges against Clinton. At a glance, the career prosecutor is an unlikely candidate to take centerstage in this weird and wild presidential campaign, but history shows Comey has never shied away from grand gestures and the headlines that follow.

Here are seven things to know about Comey:

He opposed Bush White House officials in a dramatic standoff

Comey, who was appointed to a 10-year term that will carry into the next administration, came into national prominence in 2007 when, during testimony to the Senate Judiciary Committee, he told the story of a tense standoff over a federal domestic surveillance program with top officials from the administration of President George W. Bush. (Comey had been tapped as a deputy US attorney general under Bush in 2003.)

The incident took place in the evening of March 10, 2004, according to Comey's account, with then-Attorney General John Ashcroft ill and incapacitated in a hospital intensive care unit.

Top White House lawyer Alberto Gonzales (who would later become U.S. attorney general) and Bush Chief of Staff Andrew Card had raced to Ashcroft's side in an effort to have him sign off on an extension to the wiretapping program, which Justice Department attorneys had deemed illegal. The weakened Ashcroft managed to make clear his refusal and Gonzales and Card left the room -- with Comey, then Ashcroft's top deputy, watching on -- without a word.

When lifestyle guru Martha Stewart was indicted in 2003 on a series of charges connected to a dodgy 2000 stock deal, it was Comey who brought the charges.

''This criminal case is about lying -- lying to the FBI, lying to the SEC, lying to investors," Comey, then a U.S. attorney for the Southern District of New York, said at a press conference. ''Martha Stewart is being prosecuted not for who she is, but because of what she did.''

Stewart was convicted on all counts in 2004 and sentenced to five months in prison. She served her time and was released in March 2005.

His first run-in came in the mid-1990s, when he joined the Senate Whitewater Committee as a deputy special counsel. There he dug into allegations that the Clintons took part in a fraud connected to a Arkansas real estate venture gone bust. No charges were ever brought against either Clinton, but the scandal would eventually lead to independent counsel Kenneth Starr's probe that would result in the Lewinsky scandal.

In 2002, Comey, then a federal prosecutor, took over an investigation into President Bill Clinton's 2001 pardon of financier Marc Rich, who had been indicted on a laundry list of charges before fleeing the country. The decision set off a political firestorm focused on accusations that Rich's ex-wife Denise made donations to the Democratic Party, the Clinton Library and Hillary Clinton's 2000 Senate campaign as part of a plan to get Rich off the hook. Comey ultimately decided not to pursue the case.

The kicker: Comey himself had overseen Rich's prosecution between 1987 and 1993.

Comey's first brush with the law was a traumatizing one.

In October 1977, he and his younger brother were held captive in their home by the so-called "Ramsey Rapist." The armed man, who cops were hunting following a series of home invasions, had recently assaulted two babysitters in the area.

According to an account in the Bergen Record, the Comey brothers were held at gunpoint and locked in a bathroom inside their family's Allendale, New Jersey, house. They escaped through a window but were confronted outside by the suspect before bolting back in and contacting police.

He was overwhelmingly confirmed by the Senate in 2013

Comey became the seventh FBI director when he was confirmed by the Senate on July 29, 2013, by a 93-1 count, with Sen. Rand Paul the lone holdout. The Kentucky Republican had threatened to block Comey's nomination, but relented and allowed a vote after being further briefed on FBI drone surveillance policy.

Comey succeeded Robert Mueller III, who had held the job for the previous 12 years.

He was a registered Republican for many years

In his testimony Thursday on Capitol Hill, Comey insisted that his FBI is "resolutely apolitical."

Comey himself, however, does have a partisan past -- as a Republican.

"I have been a registered Republican for most of my adult life," he said before adding that he is "not registered any longer."

He is quite tall

The 6-foot-8-inch Comey, a basketball player like President Barack Obama, is likely the tallest FBI director in the bureau's history. In a White House ceremony to announce his nomination, Obama winked at Comey's height, calling him "a man who stands very tall for justice and the rule of law."