Who was Abdelhamid Abaaoud, suspected ringleader of the Paris terror attack? 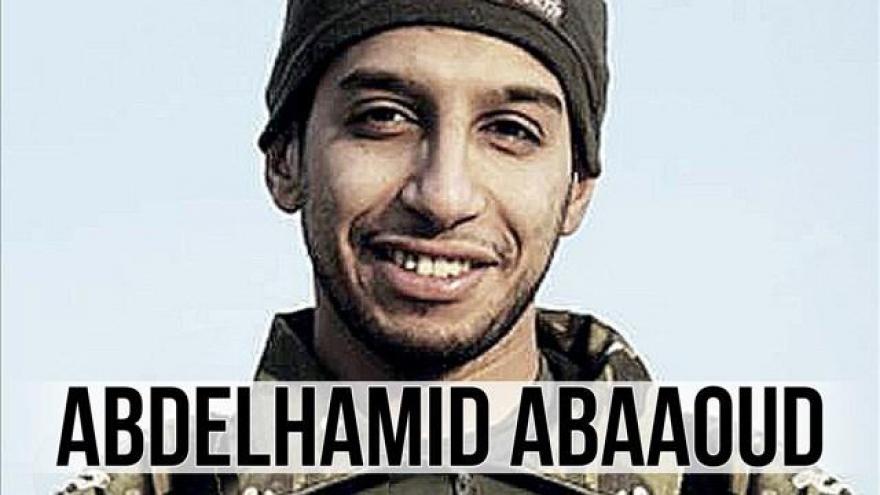 (CNN) -- The suspected ringleader of the Paris attacks is dead, the city's prosecutor's office said Thursday.

Abdelhamid Abaaoud was among those killed in a police raid in the Paris suburb of Saint-Denis on Wednesday. His identity was confirmed via prints from fingers, palms and soles, the officials said.

He was believed to be close to ISIS leader Abu Bakr al-Baghdadi, and is probably the link between the senior ISIS leadership and ISIS operatives in Europe, European counterterrorism officials have said.

French military forces carried out airstrikes in October targeting an ISIS training camp for foreign fighters in Raqqa, Syria, in an effort to kill Abaaoud, the French counterterrorism source said.

"He was the one training foreign fighters," and he spent time at the camp, the source said, but it's not clear if Abaaoud was there at the time of the airstrikes.

Bruguiere said Abaaoud would certainly have been in contact with Baghdadi about an attack like this. In addition, Bruguiere said, this fits with Baghdadi's vision of establishing the ISIS caliphate and then exporting the war to the West.

A personal connection also points to Abaaoud's possible involvement in planning the Paris attacks. Salah Abdeslam -- the on-the-run suspected eighth attacker -- is a longstanding associate of Abaaoud, with both men involved in gangs in Molenbeek, Belgium, carrying out robberies and other petty crimes. The two were tried in the same criminal case related to that activity five years ago, Belgian terrorism analyst Guy Van Vlierden told CNN.

And the French newspaper Le Monde reported that a French ISIS recruit who was arrested in August told interrogators that Abaaoud had been one of the senior ISIS operatives who directed him to launch an attack on a concert hall in France, a plot the recruit claimed to have backed out of. He told interrogators that other attacks were in the works.

Intelligence gathered before a January 15 raid in Verviers, Belgium, suggested that ISIS operatives were turning their attention toward attacking the West, and that ISIS was trying to send back European recruits to target the European countries involved in airstrikes against it, according to a senior European counterterrorism official.

Abaaoud, who lived at one point in Molenbeek -- where several raids were conducted this week -- was apparently in touch by phone with the three ISIS fighters targeted in the January raid.

In the weeks preceding the January raid, Belgian counterterrorism agencies traced the calls to a cell phone in Greece that they believed was being used by Abaaoud, according to a senior Belgian counterterrorism official. Other intelligence-gathering indicated that Abaaoud was linked to several senior ISIS operatives in Syria. Belgian investigators believe ISIS senior leadership directed the cell to launch the thwarted attack in Belgium, according to the official.

Belgian authorities publicly stated that the planned attack was meant to target Belgian police and police stations, but the Belgian counterterrorism official said the aspirations were probably for some kind of ambitious, spectacular attack, with police being only a "bonus target."

Abaaoud's name is also being linked to others who have carried out or tried to carry out attacks on other sites in Europe. A French counterterrorism source told CNN on Tuesday that Abaaoud knew Mehdi Nemmouche, who admitted to killing four people in an attack on a Jewish museum in Brussels, Belgium, in May 2014.

He's also believed to have had contact with Sid Ahmed Ghlam, who is suspected of planning an attack on a church in Villejuif, France, in April. Abaaoud has also been linked to Ayoub El Khazzani, who's accused of an attempted gun attack on board a train between Brussels and Paris in August, the French counterterrorism source said.

In a purported interview in the February 12 issue of ISIS' English-language online magazine Dabiq, Abaaoud bragged about being able to enter Europe and return to Syria at will.

"I was able to leave and come to Sham (Syria) despite being chased after by so many intelligence agencies. My name and picture were all over the news yet I was able to stay in their homeland, plan operations against them, and leave safely when doing so became necessary," Abaaoud claimed in the interview, according to ISIS.

After joining ISIS in 2014, Abaaoud posted several videos of himself on the front lines. In one of them, he can be heard saying, "It's not fun seeing blood spilled, but it gives me pleasure from time to time to see blood of the disbelievers run because we grew up watching the blood of Muslims being spilled in the whole world on TV."

The January raid in Belgium

Much of what is known about Abaaoud comes from his links to the January raid in Belgium.

Night had just fallen when heavily armed Belgian commandos approached a residence on the Rue des Collines in Verviers, a sleepy town in eastern Belgium.

The commandos knew the three men inside -- all suspected to be hardened Belgian ISIS veterans who had returned from fighting in Syria -- were likely to be armed and dangerous because they had put them under 24-hour surveillance for several weeks, according to a senior Belgian counterterrorism official.

Wiretaps of phone conversations and listening devices indicated the cell members -- who had been under observation for just under two months and were all from in and around the Molenbeek district of Brussels -- were in the final stages of preparing a major terrorist attack in Belgium, the official told CNN.

Two suspected members of the cell had taken up lodging in the residence. Belgian security services had learned they were using the building as a safe house to store automatic weapons and chemicals to make explosives.

The trigger for the arrests was the arrival at the safe house of a third ISIS veteran suspected of being the quartermaster of the plot, tasked with providing logistical support and providing the cell with equipment and supplies. Belgian security services wanted to arrest all three together, according to the official, and simultaneously make other arrests of suspects across Belgium.

They believed the cell had as many as 10 members.

What happened next, at around 5:45 p.m. on January 15, was the biggest firefight Belgian commandos have faced since World War II, captured for the world to see on video recorded by a nearby resident.

After the commandos broke into the safe house, the two ISIS fighters who had taken up residence there grabbed Kalashnikovs, returned automatic fire and lobbed grenades, using urban warfare skills honed in Syria, according to the official. But Belgian commandos soon shot them both dead and took the suspected quartermaster of the plot into custody after he jumped out of a window.

Inside, Belgian police discovered automatic weapons and chemicals for making TATP, an explosive many times more powerful than that used by the Boston Marathon bombers. They also discovered police uniforms, suggesting the plotters hoped to gain access to sensitive sites in Belgium, according to the senior Belgian counterterrorism official. A GoPro camera was also recovered, suggesting the cell might have been planning to capture the attacks on video for propaganda. Belgian police made 13 arrests that night.

Just who was the cell targeting?

Within hours, Belgian officials announced they had thwarted a major imminent terrorist attack by fighters who had returned from Syria. Belgian authorities later identified the two dead gunmen as Sofiane Amghar and Khalid Ben Larbi, and the alleged quartermaster of the plot as Marouane El Bali.

El Bali was charged with "participation in a terrorist organization, possession of explosives with intent to commit a criminal attack and prohibited possession of weapons." The senior Belgian counterterrorism official said El Bali was "like a machine" in furnishing the cell with the supplies needed to carry out the attack. When Belgian commandos moved in, he was still searching for an ice machine so the TATP explosive the group was poised to make could be cooled and transported, according to the official. "TATP is very unstable and would explode otherwise," the official said.

El Bali's lawyer, Didier De Quévy, told CNN that his client denied having anything to do with terrorism and that El Bali was in the apartment in Verviers to bring a pair of shoes to his friend. He said El Bali jumped out of the window because the apartment was on fire. The Belgian official told CNN that El Bali has refused to talk to investigators.

El Bali and two others charged with terrorist offenses in the plot remain in custody.

A 33-year-old Algerian extradited to Belgium after being arrested in Greece was also charged with terrorism offenses in relation to the plot. The senior counterterrorism official told CNN the Algerian had connections to the cell in Belgium.

The two dead gunmen and El Bali all were in communication by phone with Abaaoud. Belgian investigators believed he was the ringleader of the cell and the "link person" to the senior leadership of ISIS in Syria, according to the senior Belgian counterterrorism official. For security reasons, the cell members had an elaborate system to make phone calls and used coded language. The Algerian extradited to Belgium also had links to Abaaoud, according to the official.

The Belgians brought in U.S. intelligence agencies, including the CIA, to try to find the cell phone in Greece, but neither the Americans nor Greek police were amble to find Abaaoud, according to the official.

On February 12, ISIS claimed in the online magazine Dabiq that Abaaoud had safely returned to Syria, and the terror group posted several pictures of him. One picture taken at some point in 2014 in Syria featured Abaaoud standing next to two men ISIS claimed were the gunmen killed in the Verviers siege. They identified them as "Abuz-Zubayr al-Baljiki (Khalid), and Abu Khalid al-Baljiki (Sufyan)."

The Belgian counterterrorism official confirmed to CNN the photograph did indeed feature the men killed in the raid in January: Khalid Ben Larbi and Sofiane Amghar.

The journey to joining ISIS

Abaaoud is believed to have joined ISIS in Syria in early 2014 after traveling from Belgium, according to Guy Van Vlierden, the editor of "emmejihad," a blog on Belgian foreign fighters. At some point, his younger brother, 13, joined him there, becoming the youngest Belgian jihadi in Syria. According to Vlierden, Abaaoud developed ties to a Libyan ISIS brigade called Al-Battar. In Syria, Abaaoud became known by the fighting names Abou Omar al Soussi and Abu Omar al Belgiki.

In March 2014, the video and photo files on one of Abaaoud's cell phones were obtained by the journalist Etienne Huver from sources in a Syrian refugee camp on the Turkish border. In a report Huver filed for the Belgian news channel RTBF, Abaaoud is seen driving a car dragging the corpses of Free Syria Army fighters.

In Dabiq magazine, Abaaoud acknowledged that "a brother had taken video footage of some of us before a battle, but his camera got lost and was later sold by a murtadd (a lapsed Muslim) to a Western journalist."

Abaaoud's family in Belgium told Belgian media that, after hearing nothing from him after he traveled to Syria, they received word in October he had been killed in fighting. Belgian counterterrorism officials believe he faked his own death so he could travel more easily to Europe to coordinate the plot.