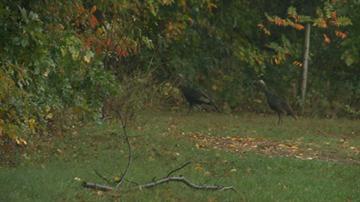 MISHAWAKA, Ind. – Wild turkeys have started making a home in a Mishawaka neighborhood.  Residents near the intersection of Day and Bittersweet have started noticing more and more turkeys in the past few weeks.

"I was up here in my husband's office and I thought, what is that?” described Peg LaFree, who lives on Day Road.  “I looked out there and then I realized it really was a turkey."

LaFree has lived on Day Road for 23-years and had never seen a turkey there until a few weeks ago, now she sees them almost every day.  Other residents said they’ve seen flocks of up to 30 turkeys in their yards.  Many believe the turkeys spend the day in the woods behind houses and come out in the morning and evening.

“I even saw what I believe is the mom with a bunch of babies at one point in time which was really cool," explained Peg LaFree.

But, there have been drawbacks.  One morning LaFree left her home to find a turkey on her husband Dan’s truck.

“I heard this tapping and I saw this turkey tapping on the front of his truck, it was on the metal part,” she described.  “He thinks he sees himself in the reflection…that went on for a long time.”

One turkey in particular is notorious around the neighborhood for tapping on cars or windows.  Most people have a story regarding a big male turkey who is described as fearless and known mostly as “THE turkey.”

“We had a stump of wood, also out front, and he went and jumped on top of the wood like he was a statue or something,” LaFree described.

Aside from window tapping, paint scratching and some eaten pet food most people in the area don’t have problems with the turkeys.  They say they’re not a nuisance.

"So far not, unless they get in my bird seed, then they're in trouble," she explained.

According to the Department of Natural Resources the reason for increased sightings of wild animals in more urban settings is development into rural areas, LaFree believes that’s why the turkeys are in their neighborhood.  She says they’re welcome to be here.

“It’s a nice, colorful attraction to our backyard,” she explained.