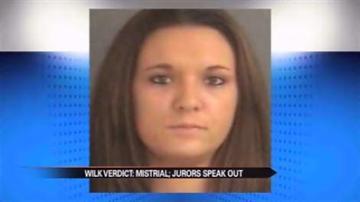 SOUTH BEND, Ind. -- It was an emotional day in court for Jacqueline Wilk's final day on trial and then it came to a shocking conclusion.

After deliberating for four hours --a hung jury was presented to the judge. The judge then had no choice but to declare a mistrial.

The 25-year-old stood trial for neglect after her two and four-year-old sons died of heat exhaustion after getting trapped inside the trunk of her car.

All the jurors ABC 57 talked to said the same thing, that this was the end to what has been an emotionally exhausting four days.

A teary-eyed Jacqueline Wilk walked out of court, hand-in-hand with family members, a free woman.

"A lot people have been very supportive with us. We are thankful for that, for all our friends and family," said one of Wilk's family members Thursday.

During the fourth and final day of her child neglect trial, Wilk took the stand to defend her innocence.

"Jackie is in the courtroom there and just seeing her cry, seeing the emotions it is really hard," said Juror Victoria Barahydt.

Something about her testimony, about what she says happened in the death of her two young sons, must have resonated with at least a few jurors.

It took them a grueling four hours to realize they would not be able to reach a unanimous vote.

"Today was very difficult and right now, its very emotional, even right now talking about it because you took in four days of information, a lot of testimony and a lot of information," said juror Rosalind Cutts.

"I definitely can't say that I had one opinion but I will say I had doubts," said Barahydt.

Barahydt says many jurors had unshakable opinions, causing conflict and controversy through their deliberation. However, there was one thing the entire jury struggled with.

"We did have trouble with one of the words and that is 'knowingly'," said Barahydt. "Did the defendant knowingly put her children in a place of danger?"

Afterwards, the judge explained that there are four different types of knowingly, one of which was recklessly. Jurors say if they had known that, this hung jury may have been able to reach a verdict.

"Recklessly is a part of that knowing and we all think that if that was a part of the case it could have been different," said Barahydt.

"We were given rules and regulations on how to decide and we were given what the charges were and you can't go outside those guidelines," said Cutts.

Wilk is a free woman for now, but she will be back in court for a status hearing on February 25th to discuss a potential retrial.

To Wilk and her family, they know that means they may have to go through this difficult process all over again.