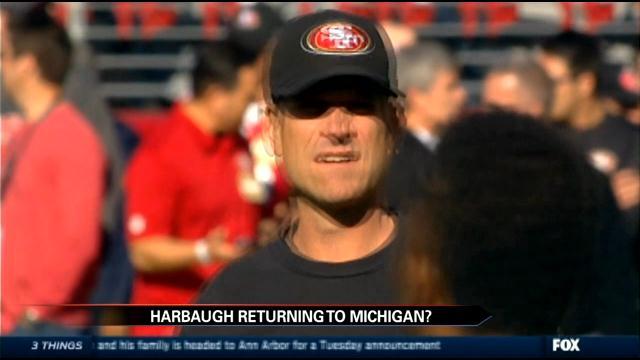 Former Michigan quarterback Jim Harbaugh is leaving the 49ers after four seasons, and the move could bring the coach back to the Midwest.

Two members of the San Francisco 49ers staff say Jim Harbaugh will be leaving his NFL team to take the same position at the University of Michigan, his alma mater.

He's expected to sign a six-year, $49 million contract by the end of the week.

According to ESPN, Michigan officials who traveled to San Francisco to meet with Harbaugh after his final 49ers game, expect to return to Ann Arbor today with he and his wife by their side.

Although Harbaugh's only comment on the speculation surrounding his potential move to Michigan was that "there will be announcements made concerning those things," he did talk about how special his time with the 49ers has been.

“I have so much gratitude because there are so many things that are given, the respect that the players have always shown, the way they've always given it their very best. And that's all I can ask. You know it and I've said it several times, it's a joy to coach this team,” Harbaugh said.

The niners went 49-22-1, including playoffs under Harbaugh's tenure. Some Michigan officials have indicated that the school would be introducing its new coach Tuesday at a press conference and at the 3 p.m. basketball game with Illinois.