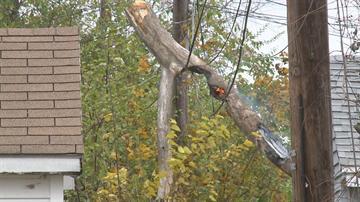 SOUTH BEND, Ind. – Trees stood no chance on Wednesday to the strong Michiana winds. Branches fell across the area which even left some without power.

On Blaine Avenue in South Bend a huge tree branch covered the width of the road, which left multiple cars turning around. For the people who heard it nearby they said they were surprised when they looked outside.

“It sounded like it was thunder, but it really wasn’t, it was a tree,” said Lori Drayton.

On Eisenhower Avenue, a branch actually caught fire after it fell on a line in between a row of homes.

“My power was off I was, uh oh, what shall I do now?” said RuVader T. Hall.
The branch continued to smoke during the afternoon.
Another neighbor, Julie Kubat, told ABC 57 she was worried about her garage which was just feet away from the downed line and smoking branch.
Kubat said she’s called and written the power company about the same tree because she was afraid it would fall on the line, but nothing had been done.
Shortly after the branch sparked, Kubat heard a boom, and walked around her house where she saw chard markings around her outside water faucet. Fire crews told her it looks like the downed line sent a shock along her fence and into her plumbing, where it was grounded by the faucet.
Kubat said she won’t know if the shock did any damage until her power comes back on.
Hall wasn’t home when the branch fell, and after ABC 57 knocked on her door, she pulled into the driveway.
“When I saw your car by the house I said uh oh let me see who this is and what’s going on,” said Hall.
Hall said she’s never seen a power line hit by at tree before and is just surprised to see this wild weather so soon.
“I think it’s very early for weather like this, but I think it’s going to clear the leaves off of these trees that I’ve been waiting for to come off,” said Hall.
Hall said she was just going to read and study inside her home and wait patiently for the power to come back on. She hopes others can do the same.
“I just want to encourage those who have power outages just to be patient and just knowing that it’s going to happen for us real soon,” said Hall.
As of 7:30 p.m. Wednesday night, the power had not been turned back on.
Share this article: