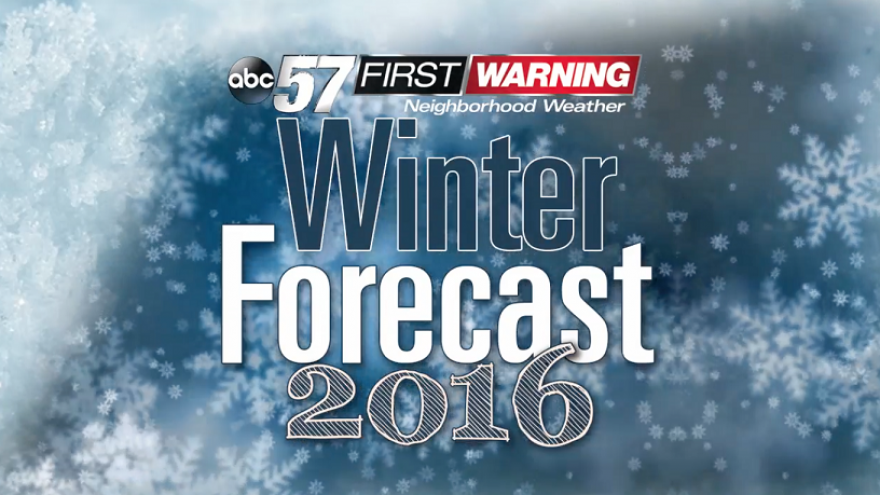 The past two winters have been known for two things, snow and cold. Winter 2015-2016 will be known likely for the opposite; milder, drier and as a result less snowy weather. That's not to say there won't be snowy or cold days, but likely less of them and less prolonged.

Let's look back at winter 2015. At first glance it looks almost as brutal as winter 2014, when you break it down it's quite different. The snow season got an early start, with the first snowfall on Halloween, followed by record breaking snowfall, with over a foot falling on November 13th. The snow then took a break , hardly any snow fell in December and near average snowfall in January. Then February happened... February 1st, over a foot of snow fell on Super Bowl Sunday. You may have remembered our #SuperSnow57 coverage, as everyone was snowed-in to watch the big game. The snow and cold didn't end until March. That month was the snowiest and 5th coldest February on record. There are many factors that impact a season's snowfall. The past two years you've heard the term "Polar Vortex" thrown around. It summarized the near locked weather pattern that kept the eastern United States in brutal winter conditions. Some years there are weak climate clues and trends, other years there are very strong signs of what to come. This year there is a strong sign, we've been talking about since the early fall, El Nino.

This year's El Nino, which is simply the warming of the eastern tropical pacific waters, could be the strongest on record.  A strong El Nino has been linked to significant impacts in the winter weather pattern over the United States, especially the Great Lakes. During El Nino, especially in very strong years, the Midwest finds itself between major storm tracks. Those tracks are associated with the Polar and Pacific Jet Stream. The example below is an approximation, and doesn't show how those tracks can buckle and change day-to-day. However this is a general long-term El Nino pattern. With the location of the Polar Jet Stream, the coldest arctic air typically stays locked over eastern Canada. Most of the northern U.S. will see above normal temperatures. Also with less frigid air moving across the Great Lakes, there tends to be less lake effect snow. The Pacific Jet Stream, tends to keep gulf moisture and most continental storm systems south. These storms could potentially bring big snow ( think #SuperSnow57), or if temperatures were warmer rain. Notice the southern U.S. is usually wetter than normal, and in part due to the increased storm activity, the southeast is also cooler than normal. As mentioned before, there are many factors that can impact weather patterns across the country. However climate scientists at NOAA tend to agree  that the overwhelming strength of this year's El Nino will likely dominate any smaller climate feature.

Looking closely at the Midwest, the farther north you live, the more temperatures are expected to be above normal. The precipitation forecast is also similar, especially for areas around the Great Lakes. When you look at snowfall over the past 40 years, highlighting El Nino, a couple things stand out. One, most coincide with less snowy winters. Two,1978 was an El Nino year, showing that one climate factor does not always make a forecast or have the all-encompassing impact. That year would also be considered an outlier. Not all El Nino years are the same. There are weak, moderate and strong El Ninos. This season's El Nino could be one of the strongest. Looking at two previous strong El Nino years show an even higher correlation to less snow and milder conditions. Notice both years saw below normal snowfall and zero days of subzero temperatures. Interestingly enough in the winter '82-'83 the first inch of snow didn't fall until the middle of January. The average date for the first inch ( or more) of snowfall over the past ten years is November 16th. Looking at the trend so far this fall and the outlook for November, autumn has been characterized by long stretches of milder and drier than normal conditions, with a few dips along the way. There's high confidence this pattern will not change through the end of the year. Expect a later than normal first snowfall. Opposite to the past two years, below normal snowfall and above normal temperatures are expected. Here are some things to take away from this forecast. First, it's just guidance from current and previous trends. The overall message is milder and less snowy no matter the exact amounts. Second, it does not mean we won't see snowy days, bouts of cold weather or winter storms. It's just less likely, and if we do they could be more benign. Finally, while there is high confidence in this forecast through early January, we'll need to update if this outlook strengthens or changes. Remember last year was fairly mild until February.