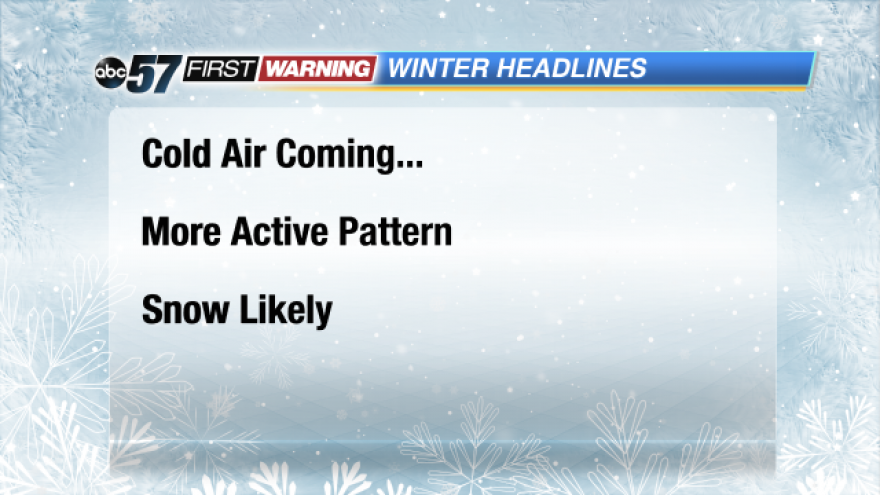 We made it through November with hardly any snow. After a mild autumn, the winter months look to be more active. By early next week the first bout of cold air plunges into the Midwest. This could be the first of many arctic blasts and with it the chance for snow.

Where has the cold air been?

Locked-up over Siberia, where heavy snow has been falling since October, the cold has been building. That cold is expected to make its first excursion from it's source into Northwest Canada  by Monday, then the Rockies and Plains before arriving in the Midwest by middle to end of next week. It was more than just air temperatures that were mild in our top five ranking warmest autumn on record.

The average temperature for the entire lake is the warmest going back to 1994. Above normal by almost three degrees. That's very significant when you think how much water covers the entire lake. Ice cover has been at record lowest levels since September. This is significant because it plays a big factor on global weather patterns. We're headed into unknown territory with the lack of ice. Already incredibly weak, due to in part the lake of sea ice, it's likely to behave wild and erratically, bringing big swings in temperature. This doesn't mean we'll be locked in the deep freeze, the pattern looks volatile, bringing blasts of cold air. The stratospheric PV is predicted to begin winter near record weak, polar opposite to last winter when it was near record strong to start winter. - Dr. Judah Cohen from Atmospheric and Environmental Research (AER)

Remaining unchanged for now as 'real winter weather' is just about to begin. This does not mean all the snow is going to come at once. However the factors at play are setting up for an increased potential of colder temperatures and above normal snowfall, through the rest of December and likely beyond. The factors talked about here are covered in further detail in our First Warning Winter Forecast 2017. As always stay with the First Warning Neighborhood Weather Team for updates.