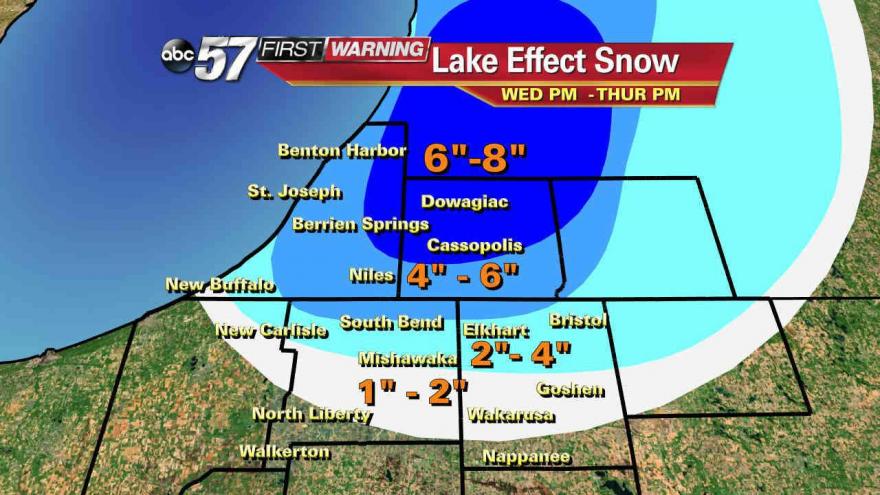 4:00 PM Thursday 11/20: Lake effect snow potential has greatly decreased as bands failed to materialize across most of southwest Michigan, resulting in milder surface temperatures and only lessening snowfall. Tonight as temperatures cool again lake effect will turn on once again. Latest models shade most the snow north and east keeping it out of the metro area. Drivers in southwest Michigan should still expect some lake effect showers and winter driving conditions through Friday morning. ( Fig 5).

10:30 PM Wednesday 11/19: Slow and steady is the name of the game with this round of lake effect snow. The heaviest bans so far have dropped around a half inch, but we continue to add up a tenth at a time. Expect this to continue through most of Thursday. The morning drive could see the heaviest snow when temperatures are coldest. There could be another peak towards the evening drive as well. -- Tom

4:30 PM Wednesday 11/19: Forecast remains largely unchanged. The heaviest snow is bulls-eyed for Cass and Berrien counties. One difference is this round of lake effect looks to be starting later, and the most intense bands will likely hold off until early Thursday. Snow total forecast for Wednesday night and Thursday are identical ( See Graphics). This gradual build up of snow will push totals into the 6"-8" range in Cass county by Friday morning. Expect to maximum burst of snow, producing the most intense bands, one Thursday morning and another round Thursday evening. The metro area may see the least impacts from snow as less as 2" by Friday morning. Blowing and drifting can make roads hazardous even if snow is not falling. -- Tom

10:30 AM Wednesday 11/19: Our initial push of system snowfall is tracking out of Michiana late this morning. All focus turns to the lake effect snow setup heading into late afternoon/this evening. Previous totals predictions and location still hold value early this morning, but slight adjustments are likely once the cold front that brought us this morning's snow has tracked through Michiana. Totals and location of the heaviest snow will hinge upon when our wind switches out of the west and our temperature when this change occurs. Stay tuned for more updates! - Greg

8:00 PM Tuesday 11/18: Prepare for winter driving conditions again Wednesday by midday, but the greatest impacts will be Thursday, especially in the morning with more lake effect snow.


Later model runs have finished and can start to pinpoint snow totals better. System snow will bring a quick 1"-3" to northern Indiana and southwest Michigan, lesser amounts south (Fig 2). There's a break before the winds turn and the lake effect snow turns on Wednesday night into Thursday.

Once again most of Berrien and Cass counties are under the bulls-eye for the heaviest snowfall with 6"-8"( Fig 1). The one difference can be compared to our last round, although minor is in the wind field ( Fig 2). Models show a later turn to the west and northwest, this could shorten the peak snowfall overnight Wednesday, but keep it steady through most of Thursday. This alone could keep amounts in general slightly less than the last lake effect event.

6:00 PM Tuesday 11/18: Another round of snow is expected Wednesday through Thursday. This will be a one-two punch, the second punch being the stronger, with lake effect snow.

System Snow: Most of Michiana will see a quick 1"-2" of system snow Wednesday morning starting around 9 AM through mid afternoon. Areas south of US-2 could see a trace to 1".

Lake Effect: While the burst of cold air is not quite as cold last time, there is potential for significant lake effect snow of +6". With a more west to slightly northwest wind, southwest Michigan is once again under the bulls-eye. Extreme northern Indiana could still see lake effect as well. Peak snowfall will be overnight Wednesday into Thursday morning tapering down through Thursday.

Forecast: Initial forecast is TOTAL snowfall, system and lake effect snow. 2"-4"of snow is likely from the state line, north.  With the potential for +6" of lake effect snow, especially in Berrien and Cass counties. Stay with the F irst Warning Neighborhood Weather Team as this forecast will be updated with later model runs.
Share this article: