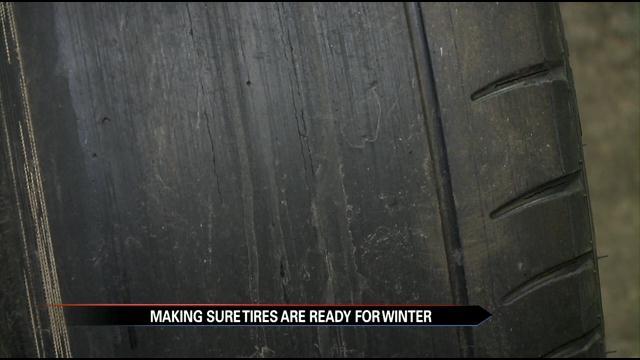 Tire shops have seen an increase in business the last couple of days due to the freezing temperatures and accumulation of snow. Some are even staying open later to tackle the amount of orders they are receiving every day.

Roy Hedman, the owner of Hedman Tire and Auto Repair in downtown South Bend said if drivers have no tread on their tires they are setting themselves up for failure this coming winter.

Since the snow started, it has not seemed to have stopped.

“It did come quick and strong,” said Roy Hedman in regards to the winter-like conditions.

Hedman's tire shop has seen an increase of calls.

“A lot of cars are coming in because of last week's snow,” said Hedman.

He said his team has been removing tons of tires due to low tread and low tire pressure.

“If the tire is getting really thin on tread, it's like a race car, like slick. You can't disperse the snow and ice and slush away from the tire without the tread,” said Hedman.

That causes cars to skid, slide and get stuck.

“It's not uncommon to see tire pressure drop four to five pounds when it's cold out,” added Hedman.

Temperatures outside will cause the air inside to deflate.

Tire maintenance is just another thing drivers have to roll with living in Michiana during the winter.

“It's a lot less expensive to replace a tire than get in an accident and have to pay repair bills on your vehicle,” said Roy Hedman.

He said tire treads are good for 30,000 to 45,000 miles. Anyone can do the penny test to make sure, though. It is simple; place a penny in between the tread and if Lincoln's head comes above the tire, it is time to replace them.