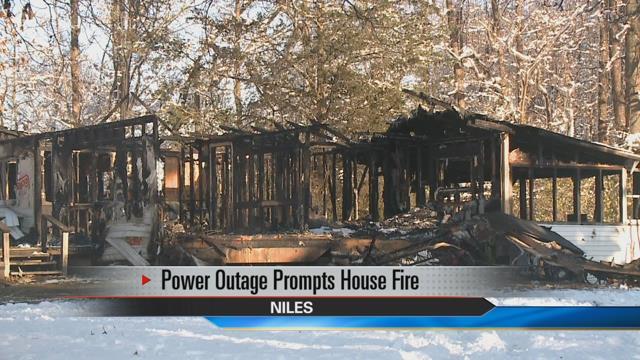 Winter weather knocked out power all throughout Michiana but in Howard Township, one family is now permanently in the dark.

The few objects still somewhat intact after a house caught fire on the 2500 block of Terminal Street in Howard Twp. are the charred remains of a child’s bicycle, the remnants of a dollhouse and a mangled satellite dish.

The occupants of the home were a family of five.

“The house is rented out to people who just moved in [Saturday] with all their stuff,” Leneway said.

The family lost power Saturday night, as many Michiana residents, did and left to stay with nearby family where it was warm.

“This morning when the power come back on, the house went up in flames,” Leneway said.

Leneway said when power was restored Sunday morning, the electrical surge most likely triggered sparks in the home, igniting it just after 11:30.

“Usually when the power company has that many people shut off, you know, it’s better to turn your appliances off so it’s not a big draw on the electrical system,” Leneway said.

Three area fire departments responded to the fire, which was later ruled an electrical fire related to the weather.

The family dog is missing but everyone else is safe.

Nobody was ready to speak on camera about the tragedy just yet but the mom involved said her family has lost everything, including her children’s Christmas presents.

An Indiana Michigan Power spokesperson said if you lose power during a storm, it’s best to unplug all of your appliances and turn off all your lights, except one, so you know when the power comes back on.

The Red Cross has been called in to help this family.