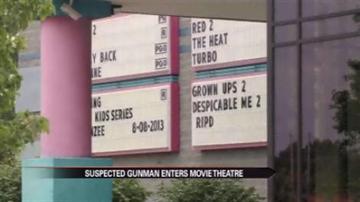 ELKHART, Ind.-- A suspected gunmen entered an Elkhart movie theater. Police found the man sitting inside the theater, pretending to watch a movie.

Elkhart Police swarmed the Encore Park 14 movie theater Sunday night. It was just before 8 p.m. when a man, believed to be armed, ran past the ticket counter and into a theater.

An Elkhart woman witnessed what she called chaos as she left the movie theater with her family. She spoke with ABC57 news but did not want her identity revealed.

They were yelling about the man who had run inside the theater, directly past the ticket booth. The witness went inside to grab her father and watched as the second male tried to warn the employee about who had just entered.

Police arrived on scene, evacuated the theater and found the male suspect sitting in a seat. They searched him and the entire theater for weapons but found no gun. Ultimately the male suspect was not arrested.

Fast forward not even a full-day later, and not one movie-goer had even heard of Sunday night's incident. Jorge Ramos came to the theater to see "The Conjuring."

He said he still thinks it's a safe place and is glad it was just a false alarm.

"All the times I've been here I never heard of anybody with a gun or anything, but I have heard about what happened in Colorado and I think that was terrible," said Ramos. "I hope nothing like that happens here because there are too many innocent people."