Witness saw plane crash from across the street 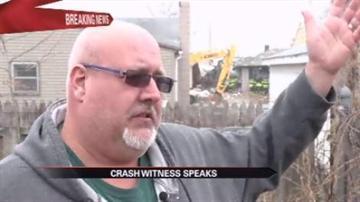 SOUTH BEND, Ind. -- A North Iowa Street resident was grilling Sunday afternoon when he heard a plane’s engine. He looked up and saw a plane headed in his direction. He is one of the few people on the ground who saw the crash – and he was just feet away from where it landed.

Brad Prestin was happy to be outside grilling Sunday afternoon.

That smile disappeared quickly when he heard the whine of jet engines coming from his left.

"I looked up and seen the plane actually diving towards our house,” said Prestin.

"My wife was standing in the back door looking at me and I was kind of looking for somewhere to go. I thought we were all dead right then. I thought the plane was going to hit our house,” said Prestin.

That didn't happen, but Prestin did see the final moments of the flight.

Prestin says the plane was upside down when it clipped one house’s roof, then rolled through another before coming to a rest.

"Insulation was falling out of the air from the houses and everything and the jet engines were still on in the jet, they were still going,” said Prestin.

Expecting an explosion, Prestin hesitated as more and more neighbors came outside to see what had happened.

"I didn't even know what to do after it hit then. My wife said, ‘Come in the house.’ And I said, ‘No we got to go out there.’ And then when I heard the engines still going and the jets were still on, I said, ‘We got to back up because it could explode at any time.’ And then the fire department was there within seconds,” said Prestin.

Prestin says the scene of the crash was calm and orderly, not what he expected at all.

He says it was locked down quickly. He and all of his neighbors were ordered to leave the area immediately.

"Those steaks are still on the grill, unless the firemen ate them, which is fine,” said Prestin.

Prestin is amazed that anyone survived the crash. He says watching it happen is something he will never forget.

Click here to view a map of the homes affected and the exact location of the crash.