Witness Speaks Out About Shooting 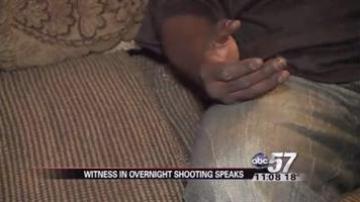 MISHAWAKA, IND. -- A 26-year-old man is in critical condition after he was shot in the main artery of his leg.

It all started outside of Riverside Tavern when it closed at about 3 Saturday morning.  The suspect got into an argument with his girlfriend and then started hitting and choking her.  Her cousin jumped into defend her.  He ended up shot and in critical condition.

The witness who saw the entire shooting and drove the victim to the hospital after he was shot agreed to do and interview with us only if we didn't show his face.  He said the whole fight started after the suspect and his girlfriend got into a fight over him trying to leave the bar eith another girl.

"His girlfriend busted him trying to leave with another girl so he ran over there and beat her up," said the witness.

The witness said everyone jumped in their cars and drove off because the police were coming.  All of a sudden the suspect jumped out of his car and shot his girlfriend's cousin.

"Point blank range the guy shot him right there as soon as he got out of the truck," said the witness.

Then the suspect turned the gun on him.

The South Bend Police Department chased the suspect on foot.  The girlfriend's cousin was lying on the ground bleeding from his main artery in his leg.

"I just couldn't watch someone just lay there and die"

So the witness picked him up, put him in his truck, and took him to Memorial Hospital

According to the the gentleman we interviewed, the suspect admitted to the police that he shot his girlfriend's cousin.