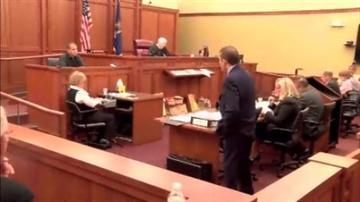 CASS COUNTY, Mich. -- The double murder trial against Keith Lintz resumed Tuesday after a three day weekend. Several people who knew Lintz personally testified to statements he made after the murders of John and Carolyn Tarwacki in February 2010.

Baker: Is there some sense you don't want to be here?

Fagley: Of course I don't want to be here.

Baker: You've got connections to that family, is that right; the Lintz family?

Fagley: That's right. They are my family.

Baker: You remember him making the gesture with the gun?

Baker: You remember him saying, he just snapped?

Baker: Your remember him saying he took them out of their misery?

The jury then heard from Ryan Dillard, a witness that came forward at the last minute - about a week before the trial.

Dillard was there the day Lintz was supposed to return from Nashville with his brother.

In the end, though, Lintz refused to go.

"I did it, I can't go back," Dillard testified. "He had said that he murdered two people."

Then the jury heard from Krista Mehl the woman Lintz is accused of beating in Nashville, Tennessee.

Mehl wasn't allowed to talk about that attack, but did have damaging testimony.

"I said, 'Keith, what's going on? I am hearing things from the neighbors about you killing people and crazy stuff like that.' He kind of stared blank for a minute, and I was like, 'Are you messing around? Like, what's going on? Are you trying to be cool?' And he said, he said, 'Don't worry it's in Michigan.' And I said, 'What's in Michigan? You killed a person in Michigan?' He said, 'No, I killed two people in Michigan.' And I was like, 'What?' And he said, 'Don't worry, all they have is my footprints, they'll never find me, the state of Michigan is too stupid to catch me,'" Mehl said.

Mehl filed complaints against Lintz that he assaulted her. It was before Lintz came back to Michigan in 2010.

The judge would not allow Mehl speak about that in court, ruling that the information could unfairly color the jury's opinion of Lintz.