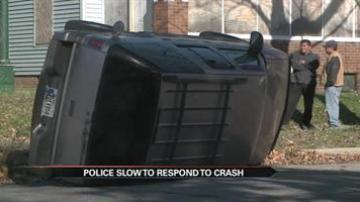 SOUTH BEND, Ind. -- A teen's SUV overturned in a hit-and-run accident on South Bend's west side.  Witnesses say first responders took their time getting to the scene.

The crash happened Wednesday just after 12:30 p.m. near Fassnacht Avenue and Studebaker Street.

Neighbors are upset with the police response time. They say it took police close to a half-hour to show up.

Willie Bailey, says it was like something out of an action movie.

"It hit the truck, it flipped the truck on his side, and slid down by tree down there," said Bailey.

The craziest part for him wasn't the accident itself, but how long it took police to get there.

"Thirty minutes," said Bailey. "No ambulances showed up - no fire trucks showed up or nothing."

When ABC57 showed up at 1:10 p.m., one officer was there and another officer was just showing up.

Davis was taken by surprise. He got a call from one of the witnesses to see if he could send help.

"It's almost a black eye to us when people have to call a council member to call the police station to have police come out to the area where there's an emergency need," said Davis.

A need he and others hope to correct.

"It's like they don't care about our community," said Bailey.

ABC57 called South Bend Police to get details on what happened. We're still waiting to hear back.

The officer on scene told ABC57 he wasn't planning on filing an accident report.