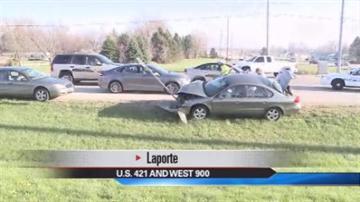 LA PORTE, Ind. --  Two people were rushed to the hospital after a car and a motorcycle collided on the 421 in La Porte.

Witnesses say they were horrified when they saw a car hit a motorcycle at this intersection on the 421.

“We witnessed a motorcycle going north on 421 and there was a car at the stoplight facing east.  He pulled out and hit the bike,” said Cuma.

A registered nurse was nearby.

“She jumped out and ran over to assist and there was a doctor that was here,” said witness John Howell.

Cuma also pulled over to help.

“I took my belt off and wrapped it around his leg and gave him my shirt for his forehead,” said Cuma.

“The lady was nonresponsive.  She was not doing anything; she was not moving. The guy was moving but his leg was seriously injured,” said Cuma.

“She was airlifted out of the scene due to a traumatic brain injury,” said La Porte County Sergeant Harlan Williams.

John Howell lives across the street and he says this intersection is dangerous.

“There are accidents here quite often,” said Howell.

“We have been here for crashes before. It is a large intersection and a great deal of traffic goes through here obviously because of the toll road,” said Williams.

Sergeant Williams says his prayers go out to everyone involved and he wants this accident to be a reminder to everyone to watch out for motorcycles on the road as this warm weather approaches.

“This time of year, spring going into summer, we want to remind people there are motorcycles on the road way so be aware of their presence and drivers be vigilant”