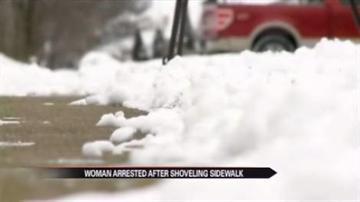 ELYRIA, Ohio. -- An Ohio man just thought his neighbor was doing a good deed by shoveling his sidewalk. Turns out one lady, dubbed the cleaning fairy, has swapped out her cleaning supplies for shovels.

The woman was previously arrested for breaking into homes, cleaning the place spick and span and leaving a bill for the unknowing homeowners.

"And then breaking in and just randomly leaving a bill...I don't know...it's just scary...especially when I have my sister and little niece inside," said Andrew Smith, Homeowner.

Police arrested 53-year-old Susan Warren after the incident not because it is illegal to shovel but for violating her parole.