Woman crushed to death by drawbridge 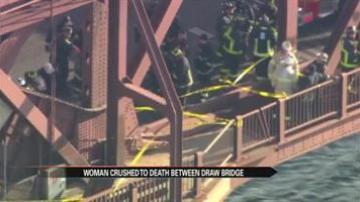 BOSTON -- A woman appears to have died after she was crushed by a closing drawbridge in Boston.

Witnesses say a woman was walking on the side walk on the bridge while the bridge was being raised.

"Everything is preliminary at this point, but it appears the bridge was being operated and being raised up. She was in some type of distress, she was in an area where pedestrians shouldn't be when the bridge is being raised," said Boston Police Chief Dan Linskey.

It is not clear yet if the safety gates were down before the bridge went up. Investigators are still talking with the bridge tender to find out what went wrong.

It took first responders several hours to retrieve the woman's body from the pilings below the bridge.