Woman in critical condition after drunk driver slams into car 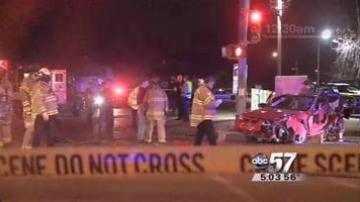 SOUTH BEND, Ind. – A woman is in critical condition and others were rushed to Memorial Hospital after police said a drunk driver slammed into a car at the intersection of Jefferson Boulevard and Logan Street around 12 a.m. on Thursday.

Three people were inside a red Grand Am when an SUV crashed into the car.

Police confirmed the woman in the front passenger seat of the car is in critical condition, and the others taken to the hospital were treated and released later Thursday morning.

An employee at the 7-11 gas station at the intersection said after he heard what he thought was a bomb exploding, he rushed out and pulled people from the vehicles.

“I started jumping, and I looked and saw smoke. I said man! I just left everything, even the customer. I left him here because I wanted to look and find anyone alive,” said Muslim Altimimi, who was working at the gas station.

Altimimi said he pulled out the alleged drunk driver from the SUV, and then ran to the Grand AM and helped a man in the backseat get out of the car.

Altimimi said he tried to help the woman in the front passenger seat, but could not do much.

“All of her hair was in front of her face and there was a lot of blood! I moved her hair and said ‘Ma'am, are you okay? Hey, are you okay?’ “ said Altimimi. “She looked at me and asked what happened. I didn’t want to scare her, so I told her to sit there and that she would be okay.

Another witness at the scene, Sunday Adelakin, told ABC 57 he was driving north on Logan Street and noticed the SUV driving erratically behind him.

“He went past me, and ran into the vehicle ahead. That is just a miracle! I don’t know how I escaped it. I mean, he was fishtailing, zig-zagging here and there, all I just heard was boom!” said Adelakin.

Adelakin and other witnesses said it looked the SUV was going double the speed limit.

The Fatal Alcohol Crash Team was on the scene for several hours, blocking traffic while officers investigated the crash. The Mishawaka Police Department is in charge of the investigation.