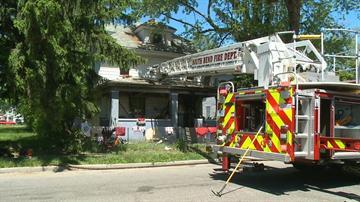 SOUTH BEND, Ind. – A woman escaped a house fire on Thursday afternoon by jumping off the roof of a porch. She was caught by strangers waiting on the ground. Three people were inside the home on East Indiana Avenue when the fire started.

Neighbors said they saw the flames and ran over to help.

"Saw the flames, immediately ran over and heard a woman screaming," said Tom King who was visiting a family member in the area.

At the same time two city employees where leaving a job site and also saw the flames, and they quickly stopped.

The driver radioed to police and fire, while the passenger, Michael Vargo, jumped out and ran to the house to help.

Vargo said they were running around the house knocking on the windows to see if anyone was stuck inside.

Eventually they heard a woman begging for help from an upstairs bedroom.

The group convinced the woman to kick out a window and she jumped into their arms from the roof.

The other two people that were inside the home when it caught fire were on the first floor and made it out easily.

People at the site of the fire were just happy they could help each other out.

"People are people and it’s a good neighborhood and at a time of a real tragic situation people came together and saved lives today," said King.

The fire department is still investigating the cause of the fire.