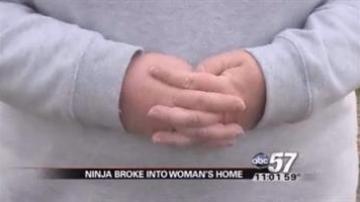 WALKERTON, Ind. –- The Marshall County Police Department wants to find a man who broke into a woman's house wearing a ninja costume on Tuesday morning.

The victim, who did not want to be identified, said it was so quiet at the time. She could hear the corn blowing in the wind, but that would soon change.

"I heard a loud noise on my metal roof and I thought it was just kids playing a prank or firecrackers,” said the victim.

The 57-year-old woman said what she heard next made her pick up the phone and call 9-1-1.

"I just heard the noise of glass breaking," said the victim.

A man somehow broke into the woman's closed porch. Then he broke a window leading into her dining room. He reached through the window, opened the latch and climbed in.

When she heard the burglar she quickly grabbed her phone and locked herself in her room, but that didn’t stop this thief. The woman told police the burglar actually picked the lock and barged through her bedroom door.

"I was screaming when he opened the door and I saw this man. A black ninja. He didn't say anything to me. He just stared. That was the longest stare I have ever had to encounter,” said the victim.

Seconds later she heard the dispatcher in her ear saying police were there. She says she yelled, "police are here!" Then she says that is when the ninja turned around and ran out of the house.

Now she is left wondering what could have happened if police had not arrived when they did.

"I had no idea what his intentions were. Was he there to scare me, kill me, steal stuff... what?" said the victim.

The woman says she hopes her story will urge other women to be more careful when they are home alone. In the meantime, the woman says she is taking extra steps to keep her home from ninjas and anyone else who comes inside uninvited. The woman says she plans on installing an alarm system, getting a guard dog and getting a permit to carry a gun.