Woman to give warning letter to "obese" trick-or-treaters 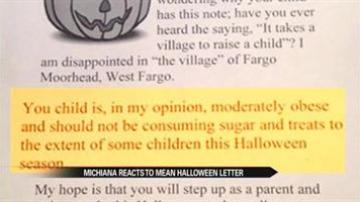 SOUTH BEND, Ind.--Butterfingers, Jolly Ranchers, and Kit Kats are a thing of the past. Kids this year are getting "fat letters." It's a viral letter that's spreading quickly on social media! A woman in Fargo, North Dakota says if kids are a little too round, they'll be leaving her doorstep with a frown.

The letter features a smiling jack o' lantern and a note to parents saying: "Your child is, in my opinion, moderately obese and should not be consuming sugars and treats to the extent of some children this Halloween season."

It's making the rounds on social media and created a buzz with parents right here in Michiana.

"I don't think this is right," said Marie Rulli, parent.

"Everyone goes through a chunky period of time where they're storing up fat before a growth spurt and it's not really someone else's job to judge,” said Anne Bostwick, parent.

The lady who wrote the letter, named Cheryl, thinks this warning letter will help a chubby kid out in the long run. No word yet if she plans to give extra candy or congratulations letters to super skinny kids.

"I wouldn't want him to see it because it kind of hurts his confidence a little bit and makes him not want to have fun,” said Rulli.

And even adults know--candy is fun, mean letters are the opposite of that, and candy isn't the sole contributor to childhood obesity.

"I think it would be more the parent's responsibility in not allowing the child to go out or saying 'hey when this bag is full that's plenty,’” said Lon Franklin, grandparent.