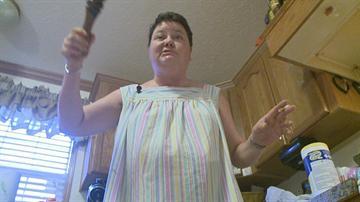 SILVER LAKE, Ind. – Sue Drake sat in her kitchen on Monday afternoon, with bullet holes and dried blood still on the floor she described her violent battle.

“The three of us were fighting over it and he said he was going to kill us,” Drake said when she and her friend, Billy Sloan got back to her house after a trip to the pharmacy on Friday afternoon, there was a man armed with a shot gun waiting for her.

“It terrified me when he had a shot gun and it scared the hell out of me when he told me he was going to kill me and Billy,” Drake said.

Sloan walked into the house first, when Drake came in through the garage the door swung open. Drake said 28-year-old Aaron Rhoades of Diamond Lake grabbed her and dragged her inside.

Drake said, “He was trying to aim the gun at one of us and me and Billy were both fighting to try to keep the gun aimed towards the floor.”

The trigger was pulled twice during the struggle; both bullets were fired into the tile floor. Drake said her friend Sloan continued to wrestle with the intruder, but Rhoades got on top of him and pointed the gun in his face.

“And the only thing I could grab was a wooden pepper shaker and I smacked him real hard over the head,” Drake said Rhoades dropped the gun and blood started to drip from his head.

While their attacker was disoriented from the blow of the pepper shaker, Sloan grabbed the gun and took aim at Rhoades, “When he looked up at me I told him to get the hell out of my house,” Drake said.

With his gun, the two chased Rhoades out of the house, but as he ran down the street he reached for a handgun is his waistband and Sloan fired. A bullet hit Rhoades in the leg, Drake said, “He fell to the ground, but then there was a getaway truck.”

Sloan fired two more shots as Rhoades climbed in and the black pickup truck sped off, but did not get very far. The Kosciusko County Sheriff’s Department was notified of a man with a gunshot wound, when deputies responded, Rhoades was taken to the hospital and then into custody.

34-year-old Karen Prater of Claypool was also arrested; police identified her as the driver of the getaway car. She confessed to detectives and is preliminarily charged with aiding, abetting and inducing burglary, as well as driving while suspended.

Drake said she does not know either of the suspects, but she did recognize Rhoades. In Mid-November Drake said Rhoades forced his way into her house and stole her prescription pain medications and money she saved up for Christmas.

Then, three weeks later Rhoades came back. According to police he admitted was there for Drake’s prescribed medications and Rhoades also confessed to the pervious robbery.

Rhoades is at the Kosciusko County Jail, he was preliminarily charged with two counts of burglary, two counts of robbery and one count of felony theft.  His bond was set for $200,000.