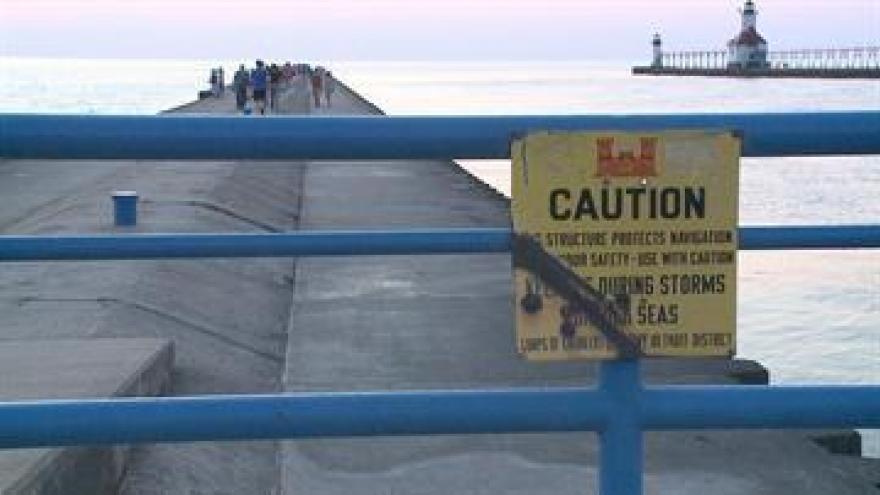 ST. JOSEPH, Mich. – Though she finds the it more than a little humiliating, Bonnie Miller of Benton Harbor decided to tell her story of falling off the south pier in St. Joseph after being distracted by texting while walking.

Police, firefighters, Michigan State Police and the Coast Guard were called to the pier around 9:30 p.m. on Monday after getting a 911 call that three people were in the river channel leading to Lake Michigan.

Earlier in the evening Miller, her husband Greg and her 15-year-old son Quinn had been walking along the pier enjoying the weather.  They had just passed the end of the railings that extend only about half the length of the pier when Miller realized she had to send a text.

“I had set an appointment for the wrong time and so I sent about three words,” Miller described.  “Next thing you know it was the water.”

Miller explained she didn’t realize how close she was to the edge of the pier, she then stumbled after tripping over something and tumbled over into the water.  She and her family estimate she fell at least six-feet into the water.

“Quinn said he just heard me say ‘Oh God’ and then a splash,” she explained.  “When you’re down there and the water is very low and all you see is pier.”

Miller was having trouble staying afloat, her husband Greg jumped into action and dove into the water after her.

“It was very chaotic for a bit,” Greg Miller described.  “I just went for it and gave her a big push towards the side of the channel there.”

A bystander, 19-year-old Rebecca Van Zant of Mishawaka, jumped in as well to help the Millers.  Quinn Miller, their 15-year-old son, reached down from the pier as Greg Miller pulled and pushed his wife up out of the water onto a ladder attached to the pier.

“I heard her gasping for breath,” Quinn Miller described.  “But, once I knew that I had her hand it was pretty calming and I knew everything was going to be OK.”

Firefighters, police and the Coast Guard showed up quickly.  A St. Joseph Police Officer threw a floatation device with a rope down to them and assisted them in climbing up the ladder back onto the pier.

“I can’t believe how many people came, I’m really quite embarrassed,” Miller described.  “I’m just so grateful to be alive, I have a new lease on life.”

Though the experience was humiliating, especially with the media coverage it has attracted, Miller said she wanted to tell her story to thank the bystanders and first responders who had saved her life and to let it serve as a warning to others.

“I couldn’t let pride stand in my way of warning other people to not drive and text or walk and text,” Miller explained.  "It can be dangerous."

Aside from the embarrassment, Miller wasn’t seriously hurt by the fall and none of her rescuers suffered any injuries.