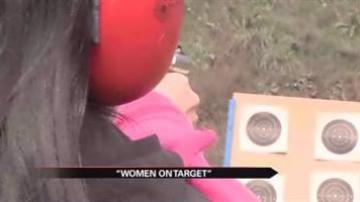 ST. JOSEPH COUNTY, Ind. Nearly half of all American adults have a gun in their home and nearly half of those gun owners are women.

Saturday the South Bend Police Department held annual fall "Women on Target" handgun training course and many of the women who attended said they signed up because the crime seems to be increasing in our area.

Sgt. Tom Cameron with the South Bend Police Department said, "We are empowering women with the knowledge of safe gun handling and how to shoot a gun. I think we've been doing this for 13 years, I know it was in the late 90's when we started doing this. A lot of ladies almost always show up, they are concerned about their safety, there's an issue at work, there's an issue at home and they want to learn how to handle a gun."

Jirada Clark of South Bend is a first time shooter, but after more break-ins have been happening in her neighborhood she decided to sign up for the gun safety course for women. "My garage was broken into recently, and lately it has been kind of like, I should try to maybe get a gun for safety," Clark said. She registered for the class along with her mother.

Margaret Jackson of South Bend said, "Even though I live in a real nice neighborhood, it still is getting worse." Jackson is in her 80's and is widowed. She said she attended the Women on Target course because she wants to learn how to protect herself just in case someone tries to break into her home. She said, "I want to learn how to shoot my gun for self protection, I have been thinking about this for quite some time."

Gayle Jenkins of Merriville said, "My husband owns several guns so I just really wanted to get comfortable with them, the different types of guns. She signed up for the class after seeing an advertisement in the newspaper while at her mother's house in Niles last week. "I am enjoying this; I'm having a good time. The classroom session was very informative, and I would tell any young lady that needs to protect her home, protect herself or just wants to target practice to check it out," she said.

Sgt. Cameron said, "We start off a couple of hours in a classroom; we provide all the handguns and ammunition. We go through semi-automatics, we go through revolvers, then we show them how to aim, fire and then we go out to the range.We fill the class up every time with 30 ladies."

Officers aren't paid to be there, instead, they are volunteering their time.

The Women of Target course will be offered next in the spring. There is a $40 registration fee. If you have your own firearm you are welcomed to bring it.