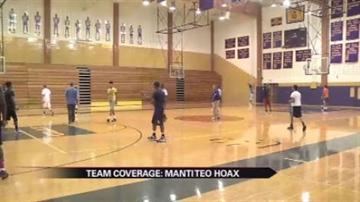 SOUTH BEND, Ind. When news broke that Notre Dame’s Manti Te’o was the victim of a hoax, it was a shock to many – especially those who looked up to him. ABC57 spoke with students, coaches and parents about how the scandal has affected their view of Te’o.

Learning to take responsibility is a big part of growing up.

"We talk about accountability for your actions all the time,” said Joe Huppenthal, Clay High School's head basketball coach.

With Notre Dame stand out Manti Te'o in the news right now, Huppenthal says it's another reason to bring up the issue again.

"This is a good life lesson too for a lot of young kids growing up and for the college kids at Notre Dame right now,” said Huppenthal.

A lesson he says teaches athletes that they are in the spotlight whether they are "in his arena" on or off the court.

"It’s ridiculous that some people think he made it up because I don't think you can make anything up like this,” said Khalin Diggins, a Clay High School basketball player. Diggens said he doesn't think this recent hoax will tarnish Te'o's image or his role model status that he sees him as still to this day.

However Diggins has a very different perspective on the "Manti girlfriend hoax" --- than his classmate and teammate Darren Taylor.

"The news is saying he knows nothing about it but my personal opinion, when something like that goes on for so long, I mean I think he lied about it,” said Taylor who said he's not feeling Te'o is a role model now.

Both players agree when there is controversy, whether it is your fault or not, it puts you in the spotlight and you might not have a chance to rebound.

"Playing this game of basketball is much more than on the court- it's off the court too,” said Taylor.

Coach Huppenthal said, "I was really stunned to hear the news, yet I'm still reserving judgement because I still don't have all the facts."

ABC 57 News also stopped by Walt Disney Elementary School and spoke to parents as they were waiting to pick their children up as school dismissed for the day. Cathy Woodbridge who picked up her 5 year old grandson named Landon said she and her family are huge Notre Dame fans.

"My gut reaction is give Manti a chance with what's going on." Landon said Notre Dame is one of his favorite teams. "As far as role models I believe Manti is a great role model, unfortunately I don't that there really are as many role models in the world today as there used to be," Woodbridge said.