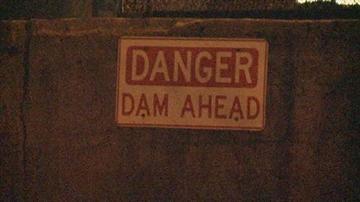 SOUTH BEND, Ind. – A few yards from the low dam east of the Jefferson Street Bridge, three people were holding on, as if their lives depended on it; and perhaps it did.

The engine in the trio’s boat stopped working, and the watercraft was swept away in the strong current of the river.

As they approached the Jefferson Street Bridge, they had to stop their drifting or they would go over the low dam and run the risk of ending up in the grip of a virtual meat grinder.

The base of the dam churns as if the water was boiling. Below the surface are hidden boulders ready to smash anything caught in the circular motion of the trap. Rescue crews are taught never to go near it.

“That’s a terrible situation to be in, because you would possibly re-circulate in that dam; there are boulders below it that can beat you up as you re-circulate in it,” said Al Kirsits, Battalion Chief for the South Bend Fire Department.

Eventually the crippled vessel was pulled to safety, and the three passengers were able to get back on dry land.

According to water rescue personnel the owner of the boat may have purchased it recently and may not have been fully familiar with how to operate it.

Tonight, rescue crews are cautioning people to stay off the river if they are inexperienced or are not equipped to deal with emergency situations like this one; at least for now.

Currently, the river is running high and swift, and the water temperature is still low enough to cause hypothermia in a matter of minutes.

It may look harmless, but things can quickly become deadly given the right circumstances.
Share this article: