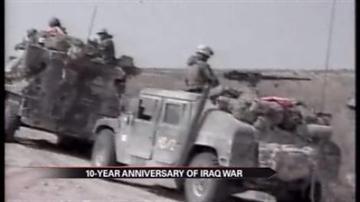 Tuesday more violence continued in Baghdad as bombings killed 57 people and wounded 200 others.

"The fact that Iraq is in a place, as difficult as its challenges remain, where it has the potential for a better future, is due in no small measure to the sacrifice and service of American men and women," said Jay Carney, White House press secretary. "It's also obviously due to the courage and perseverance of the Iraq people, and we should note that."

Even 10 years later debate continues about whether the war was worth it. A recent poll shows 53-percent of Americans now believe it was a mistake.