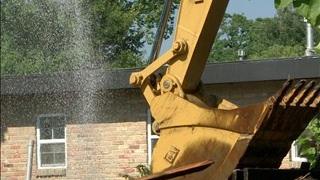 On Monday, the South Bend common council will be tackling the abandoned homes issue that has been affecting the area.

We decided to take a look at the progress so far of the local 1000 homes in 1000 days initiative, introduced back in February 2013.

Nearly 400 days in, the current number of abandoned homes taken care of stands at 606, according to the Vacant and Abandoned Properties Task Force's most recent data from October 2014.

Since the introduction of the 1000 Homes in 1000 days initiative in February 2013, they say 188 houses have been repaired and 297 have been demolished. 45 are under contract for demolition and 8 for deconstruction. And 62 are under the state of Indiana's Blight Elimination Program. That means state dollars to demolish those properties. 6 are CDC partner houses for rehabilitation.

That leaves a little less than 400 properties left to complete the goal. The target completion date, according to Mayor Buttigieg is November 24th of next year. They are defining abandoned properties as homes that no one has lived in for at least 90 days and have a housing related code violation that hasn't been addressed in 30.

It is an issue that isn't just affecting South Bend. The Indiana Foreclosure Prevention Network says that the state has the highest percentage of abandoned foreclosed homes in the country.

The network is also saying that these abandoned homes negatively impact homeowners and our neighborhoods by reducing property values. Now the high cost of taking care of these homes can drain municipal resources. And that is why a portion of Indiana's Hardest Hit Funds are being used to help cities like South Bend demolish or repair abandoned properties. The cost to demolish one home is estimated at 6000 dollars.

There are some things you can do about this. For one, if you see an abandoned home or find one that's recently become vacant you can report it on the city of south bend website. You can also report code violations and view a map of abandoned homes in your neighborhood.