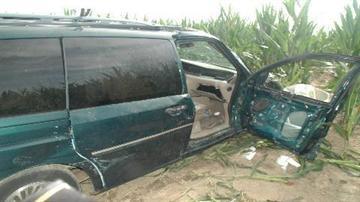 Kosciusko County, IN - An 11-year-old boy was seriously injured Friday evening in a two vehicle crash.

When emergency crews arrived on the scene they found a 1993 Ford F150 pickup truck on the shoulder of the intersection and a 1998 Ford Windstar van in a cornfield off the road.

The 11-year-old who was sitting in the front passenger seat of the van was immediately airlifted to Parkview Memorial Hospital from the scene.

Investigators said the driver of the van Janett Vining, 30, of Claypool had been northbound on C.R. 450 West and stopped at the stop sign at State Road 25. Vining then apparently didn't see the wesbound truck and pulled out directly in its path.

The truck was driven by Roger Davis, 56, of Lafayette.

The pickup truck slammed into the passenger side of the van where the 11-year-old had been sitting.

Vining and a juvenile female riding inside the van were not injured in the crash; Davis was also not injured.

The 11-year-old was listed in serious but stable condition Saturday morning at Parkview with face and chest injuries.