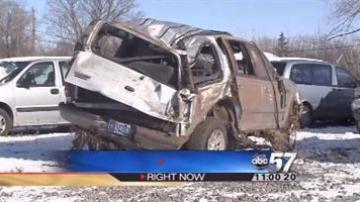 SAINT JOSEPH COUNTY--   Classmate and friend of Corey Downhour, Tori Langford was saddened by the news that her friend Corey had died in a car crash today while riding with two of her other friends.

"Just being friends with everyone it kind of freaked me out made me cry a little", said Tori Langford.

Tori says she thinks her friends were probably just young, dumb and trying to have fun when they took the S.U.V. for a joyride.

"He is just that age.  He is fourteen.  I mean what fourteen-year-old does not think it is cool to drive", said," said Tori Langford.

Tori's mom Wendy agress with her daughter but says she feels for Corey's parents.

"Thank god it was not my own kid.  Kid's do crazy things.  Mine's done crazy things already, and i cannot imagine what the parent's are going through", said Wendy Langford.

Wendy Langford says she wishes the kid's would have been caught before they got in the car, because she says they are going to feel the pain from their mistake for the rest of their lives.

"They don't realize the consequences could be and this one is going to hurt for a long time", said Wendy Langford.

There is no word as to whether or not the fourteen-year-old driver will face charges.