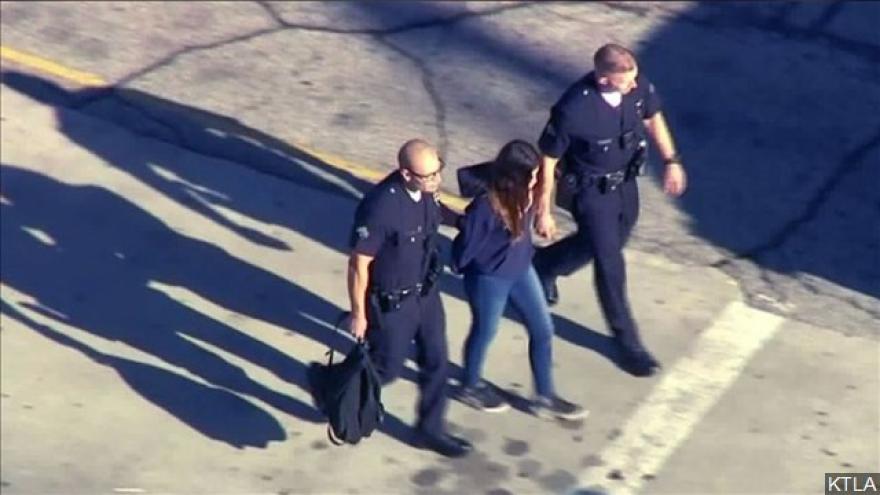 Police take a girl into custody on the campus of Salvador Castro Middle School in Los Angeles following a shooting in which four students and an adult were injured. Photo courtesy KTLA/MGN

By Madison Park and Joe Sterling

Warrants will be issued for being a minor in possession of a firearm and bringing a weapon on school grounds, the DA's office said in a statement. She is expected to be arraigned Monday.

Police earlier said the Thursday shooting was "unintentional." Police didn't say what led to the shooting, which unfolded at the Sal Castro Middle School in the city's Westlake district.

While "negligent" use can cover a variety of activities, it most likely refers to "mishandling" in this case, Ramirez said.

"This continues to be an active investigation," according to an LAPD statement. "However, at this time, the information suggest that this was an isolated incident, involving the negligent discharge of a firearm, where innocent children and a staff member were unfortunately injured."

The girl was taken into custody without incident after she and witnesses were interviewed, officials said.

California state law says information about juvenile court proceedings must be confidential except when juveniles are accused of specific serious or violent felonies, the DA's office said Friday.

Victims are expected to recover

The shooting was reported to police Thursday at 8:55 a.m. It happened in an elective class with students from different grades, LA School Police Chief Steven Zipperman said.

The victims include a 15-year-old boy who was shot in the head but is expected to recover, said officials at Los Angeles County + USC Medical Center. He was shot in the temple and was "extremely lucky" that the bullet missed vital structures, said Dr. Aaron Strumwasser, a trauma surgeon. The student remains in intensive care.

A 15-year-old girl who was shot in the wrist also was hospitalized.

Two other students, ages 11 and 12, suffered graze wounds and were treated and released, Strumwasser said. A 30-year-old woman suffered a minor injury in the chaos after the shooting, officials said.

After the campus was declared safe Thursday, the school day continued, and students could talk to counselors about the shooting, said Vivian Ekchian, interim superintendent of the Los Angeles Unified School District. The school was to hold classes Friday.

A student who was in the class when shots rang out said he thought the gunfire was an accident, CNN affiliate KABC reported. The girl holding the firearm "didn't mean to" shoot the 15-year-old girl, he said, according to the station.

"They thought it was a toy gun, but then it shot," KABC reported, quoting Benjamin Urbina.

Few details were released about the girl who was detained. Her grandmother spoke briefly with KABC. The woman, who was not identified, told the station that her granddaughter was caring and loving but didn't have many friends and had been bullied by another girl.

This was at least the third school shooting in recent weeks in the United States.

A student is accused of shooting 16 people -- killing two -- on January 23, at western Kentucky's Marshall County High School in Benton.

A day earlier, a 15-year-old student was injured in a shooting in the Texas city of Italy. A suspect, a 16-year-old male, was "apprehended within minutes," city officials said.