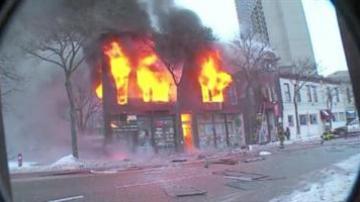 MINNEAPOLIS, Minn. -- Thirteen people were injured, six of them critically, after a fiery explosion rocked a three-story apartment building in Minneapolis Wednesday morning.

Three people are still unaccounted for and firefighters say it is possible some people did not make it out of the building.

Fire crews had a tough time getting inside the building to get people out because the flames were out of control.

On top of that, the temperatures in Minneapolis Wednesday morning were below zero.

"When crews initially arrived on scene there were reported flames shooting as far as 20 feet out of the windows on the second and third floor. The conditions were so poor and it became very, very unsafe that we removed all the firefighters from the structure," said Minneapolis Fire Department Chief John Fruetel.

Some of the people who were sent to the hospital suffered from serious burns and others were injured after they jumped out of second and third story windows to escape.