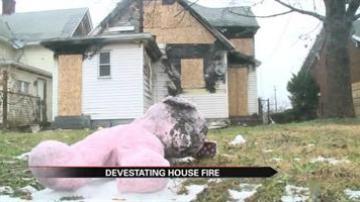 SOUTH BEND, Ind. – A house on Dunham Street caught fire and left 13 people, including eleven children, without a home for the holidays.

“The electric just started popping,” says Pam O’Connell of South Bend. “The flames were just coming out of one side of the window.”

O’Connell is a neighbor who witnessed the house in flames.

“It was a big boom, then you just heard crackling,” says O’Connell. “It was like a roar when I was standing out here.”

Three children were at home at the time of the fire according to O'Connell.

“They found three kids in the alley behind the house,” says O’Connell.

The home was destroyed.

“They had everything, they lost all of their toys, they told me all of their gifts, the Christmas decorations, I mean the tree, everything,” says O’Connell. “I pray that people will step up and really help them for Christmas.”

The Red Cross of Saint Joseph County has provided assistance to the family.

If you would like to help Michiana families in need of some extra help this holiday season, the Red Cross relies on donations from the community.
Share this article: