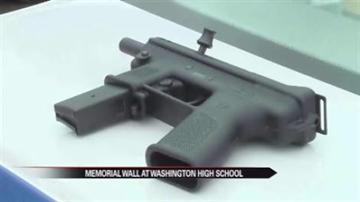 SOUTH BEND, Ind. – The Martin Luther King Center is supposed to be a safe haven for south bend kids, but over the weekend it was anything but that.

Police had to arrest a thirteen-year-old kid because they found a loaded pistol in his backpack.

South bend dad Michael Martin says Sunday evening he drove by the Martin Luther King Center to check on his kids who were shooting hoops, but what he saw instead was a very scary situation.

“There were about ten police cars so I pulled over and the policeman there was nice enough to inform me about what happened.  He told me there was a kid there with two pistols in a bookback,” said Martin.

According to the police report, officers got an anonymous call that two people had guns and were bragging about being involved in some of the recent shootings in the city.

When officers arrived they saw a thirteen-year-old put down his backpack and walk on the basketball court.

They found marijuana and an intratec model ab-10 luger handgun similar to this one inside.

They arrested the young teen, notified his mother and took him to the Juvenile Justice Center.

I reached out to the Martin Luther King Center for comment.  The assistant director told me the director is out of town until next week,but said the incident happened after center hours outside of the building.

Parents agree the center isn’t at fault for this incident and think the staff are doing all they can to protect the kids who go there.

“They really watch the kids. They are on top of what’s going on,” said Elder Wilson.

But Martin says as hard as the staff at the center works, it’s still located in a rough area and these streets are still dangerous.

“My issue is not with the center.  It’s with getting to the center,” said Michael Martin.

According to the police report the handgun belonged to the 13-year-old’s older cousin.