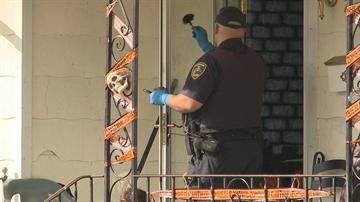 SOUTH BEND, Ind. – A 13-year-old ended up in the hospital after being pistol whipped during a home invasion on the 2300-block of Bertrand Street on Friday afternoon.

Police were called to the scene just before 2:30 p.m. on a report that three armed suspects had broken into a house.

"What we believe were three juveniles entered the house through the front door, literally forced the door open,” described Sgt. Charles Stokes of the South Bend Police Department.  “At least two of them had handguns; they smacked one juvenile who lives here, a 13-year-old, in the head with a gun."

The suspects ransacked the house and tried to take TVs and video games.  In the middle of the home invasion, the mother of one of the four victims in the house came to pick up her son.

"He ran outside and said 'mom, they broke in the house,' and by the time mom got in the door all three suspects got out the back door and fled," Sgt. Stokes explained.  “Two of them had masks and were not identifiable, but one did not so that’s the one we’re looking for.”

As of late Friday no suspects had been arrested, police believe the home invaders might attend the same school as the victims.

“It looks like all these kids probably go to school together,” Sgt. Stokes described.  “Why they picked this house we don't know yet."

Neighbors said the ages of all involved, both the victims and the suspects, made the case even more disturbing and shows South Bend’s youth violence problem continues to get worse despite the efforts of the police department.

"It seems every time they stop something two more things happen,” explained Tekona Henry, who lives a few doors down from the scene.  “These kids, they're just like completely lost and to be walking around here hitting people in the head with guns is just terribly disturbing."

The 13-year-old who was pistol whipped was not seriously injured and was only taken to the hospital as a precaution.