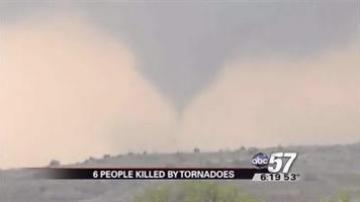 WOODWARD, Okla. -- Parts of the Midwest are cleaning up on Monday after severe storms over the weekend spawned more than 130 tornadoes!

Check out the damage! Homes have been leveled. Cars were tossed. Trees are gone!

In Woodward, Okla. lightning took out an early warning system.

Six people died when the tornado made a direct hit.

LaCei Hutchinson saw the twister and ran from house to house, warning neighbors!

"You could see it with the lightning.  When the lightning struck up, you could see it... It was huge! It was making circles and skipping around over here. I'm surprised those trailers over there are still standing," said Hutchinson.

Thousands of lives were spared, thanks to early storm warnings!

Days before the storm, the NOAA issued a threat of "extremely dangerous" weather.