$14 M for classic car found under a pile of French magazines? 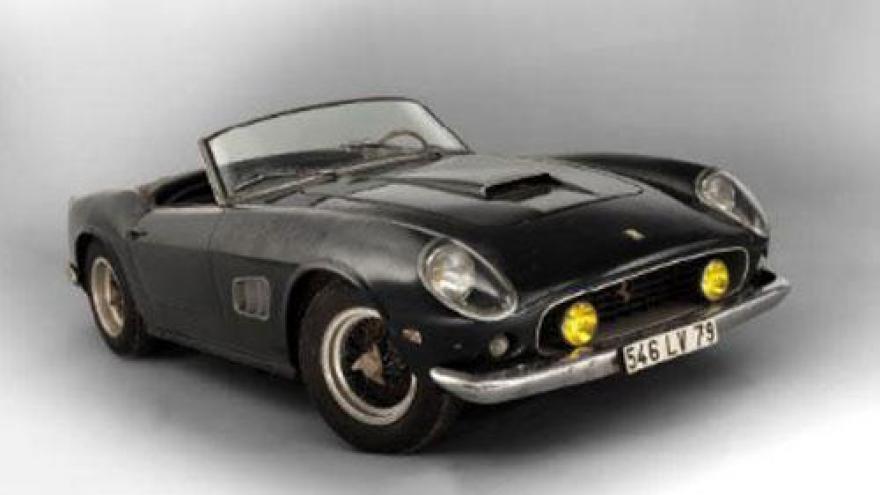 
(CNN) -- Early next year, bidders are expected to shell out millions for cars that stood around in Roger Baillon's yard for decades.

The French truck manufacturing mogul had big dreams for them. He wanted to found a museum and build a miniature railroad loop for visitors to ride around and view them, a Paris auction house said.

But the plans evaporated when his business went bust in the 1970s. He sold off nearly half of his collection, but 60 of his classic European luxury and sports cars -- many built in the first half of the 20th century -- remained and collected rust, dust and weeds for about 50 years.

Until car experts from auction house Artcurial recently came upon them in a small town in western France, not far from La Rochelle.

Now, buyers will probably write checks for hundreds of thousands for just one of the sagging exquisite carriages. Artcurial will put them under the hammer in February and expects the crown jewel in the collection, a 1961 Ferrari 250 GT SWB California Spider, to fetch 9.5 million to 12 million euros ($11 million to $14.9 million).

The convertible was one of only 37 of its kind made, and it is in comparatively great condition, as it slumbered behind the doors of a snug garage, Artcurial said.

Most of the rest of the other sleeping beauties lay comatose under roofs of corrugated steel held up by posts; with no walls to protect them, they were exposed to the elements.

Novikoff heard about the car yard over the phone and went to check it out.

At first glance, the cars looked like the rest of the junk in the yard -- old washing machines, metal scrap, barrels. But gems gradually sparkled through.

"Nature had taken a hold over the years. Ivy had invaded a car and entirely covered its (steering) wheel, while weeds had taken root in a passenger compartment as easily as in a greenhouse," Novikoff said. "In places, the sheets of corrugated iron were resting directly on the cars."

Baillon died about 10 years ago, said Artcurial spokeswoman Rebecca Ruff. Baillon's son inherited the estate, but when he recently died, his heirs contacted the auction house to sell the unique collection, she added.

Most of the cars will require a deep kiss of restoration to reawaken the former glory of their exclusive brands, some of which are no longer manufactured.

The largest contingency of the collected cars hit the streets between 1955 and 1965, Artcurial said in a statement.

Some have stories to go along with them.

The 1961 Ferrari was once owned by French silver screen demigod Alain Delon, Artcurial said, and he was photographed sitting in it next to Jane Fonda in 1964, and with Shirley MacLaine.

Legend also slumbers in the peach-colored rust covering a pre-World War II Talbot-Lago, a French classic brand that died out some 50 years ago.

Artcurial says this one was driven by former Egyptian King Farouk.