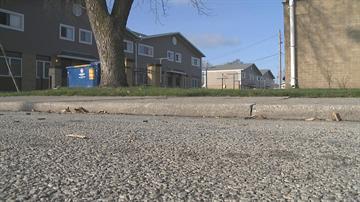 ELKHART, Ind. – A 14-year-old is in custody, accused of sexual battery and attempted rape. The boy was arrested after two victims; young girls reported two separate attacks on Sunday.

Elkhart Police first responded to a 9-1-1 call made from Wagner Avenue, Jonasha Mackey said she saw a girl running behind her apartment, hysterical.

“She looked like she was crying and I asked her what was wrong,” Mackey said. “She said she wanted to use our phone to call the police because she had just gotten attacked.”

Mackey said the girl used her cell phone to call police and then her mother after the sexual assault.

According to police reports, the victim was attacked near the 200 block of East Indiana Avenue. Mackey said the girl told her she was 13-years-old, walking home from the Laundromat she said a boy followed her.

“Some guy just attacked her, she says he was around 14, she thinks she knows him,” Mackey said the girl told her she recognized the boy from school; he pushed her up against a tree and tried to rape her.

Mackey said, “She not going to want to go outside for a long time, I’m pretty sure she’s traumatized.” And she is just one of the boy’s victims.

The Elkhart Police Department got called back out Wagner Avenue later that day for a second incident report, a girl there told police she had been strangled and raped.

Both of the alleged attacks happened to one another, the first attack reportedly took place less than a half mile from the second, on the 300 block of Wagner Ave. That is also where the 13-year-old victim ran for help and made the 9-1-1 call.

Officers said they do not know when the second incident occurred, but police did arrest the 14-year-old boy on charges for both of the girls’ allegations on Sunday.

The boy was arrested at 422 Wagner Avenue, it’s still unclear if this is his address or not, police were not sure.

In the original police report, the 14-year-old was arrested on charges of rape and strangulation, but another was sent out Monday afternoon with an update of the charges.

The Elkhart Police Department has not released the name or mug shot of the 14-year-old boy because he is a minor; he has a hearing scheduled at the Juvenile Detention Center on Tuesday at 1 PM.

Police are still investigating, looking for more possible victims who may have been attacked and or raped by the 14-year-old.