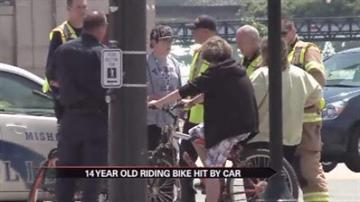 MISHAWAKA, Ind. -- Police say a 14-year-old boy is recovering after he was hit by a car while riding his bike near downtown Mishawaka on Sunday.

It happened around 12:45 p.m. near Mishawaka Avenue and Main Street.

The 14-year-old was crossing Main Street, when witiness say a man driving a black car was turning onto Main Street from Mishawaka Avenue.

"The Mishawaka police called and said that my son was hit by a car and I was pretty panicked he could've been seriously hurt or dead. It's a real shaky panicky feeling you get," said Jennifer Johnston.  "It makes me mad you know they need to own up to what they did."

The teen says the driver did ask if he was okay.

Witnesses say the driver quickly got into his car and took off.

Police are still looking for the man.