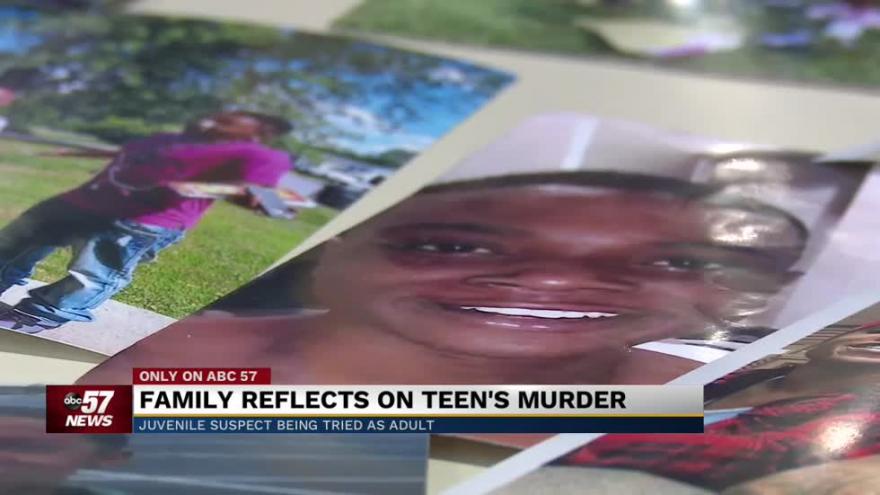 ELKHART, Ind. – A 14-year-old boy from South Bend accused of killing another teen in Elkhart will be tried as an adult.

An Elkhart Juvenile Court judge made the decision at a hearing Friday.

Both the state and defense agreed this is a sad case, but the judge believed in order to protect the safety of the community and James, the case needs to be waived to adult court.

James wore a red jumpsuit and slouched in his chair during the hearing. He even refused to come out of his holding room initially.

It happened on S. 10th St. in Elkhart last September.

In court on Friday, a witness testified that Minies met with James to sell him an Xbox in exchange for a gun, but before the deal was closed, James allegedly decided to try and steal another gun Minies was carrying, shooting him seven times in the process.

“I’m grieving the loss of my son’s life,” said Jaren’s mother April Canady. “The loss of his potential, the idea of him growing to be a father, you know, him having his own life. I grieve that every day.”

Another witness testified James then ran away to Ithaca, New York.

While there, the witness said, he and two others, nearly stabbed and punched a person to death.

It’s not clear when that happened, but police in New York caught James quickly. He was convicted of the juvenile equivalent of gang and assault charges and sentenced to 18 months of detention.

He served a little more than six months before being extradited back to Indiana.

Both of the crimes happened while James was on the run from police in St. Joseph County, Indiana according to hearing testimony.

A witness said James faces child exploitation and pornography charges for allegedly having non-consensual sex with an unconscious female.

That same witness said he has been charged with several crimes dating back to March 2018. A judge ordered him to home detention and other treatment, but James allegedly cut off his ankle monitor twice and did not complete any programs.

ABC57 filed a public records request for more information on James’ juvenile criminal history but have not hear back.

“Obviously this is a tragedy all the way around but now we’re going to go through the procedural steps and protect his due process rights as we move forward in the adult system,” said Becker.

Minies’ family and friends described him as an optimistic kid who loved fashion and churros.

“He always, always had a smile on his face,” said Canady. “It was his optimism that made me feel like I can do anything.”

“He was definitely a go getter,” said friend Keon Bowen.

Susset Rocha, another friend, said, “He always had you.”

“Jaren was the light of our family,” said Aunt Jennifer Canady. “He was the anchor.”

“Everything that I do, like he crosses my mind,” said Bowen.

“You go from thinking this person is going to be my future and then one day they’re not,” said girlfriend Ashonti Byrd.

“I will forever have a Jaren-sized hole in my heart,” said Canady. “I never imagined that I would lose Jaren to violence. It just wasn’t the person that he was.”

Minie’s family and friends did not attend Friday’s hearing but say the decision is the first step to justice and helping them flicker Minie’s light back on.

“I see people that know him and then they want to share,” said Canady. “It’s always something positive. When I am at my lowest and I do think about him it’s like somebody comes around to remind me, or that’s his way of saying mom I’m still here. It makes me want to continue to live in his life.”

James’ initial hearing in adult court is scheduled for August 22.