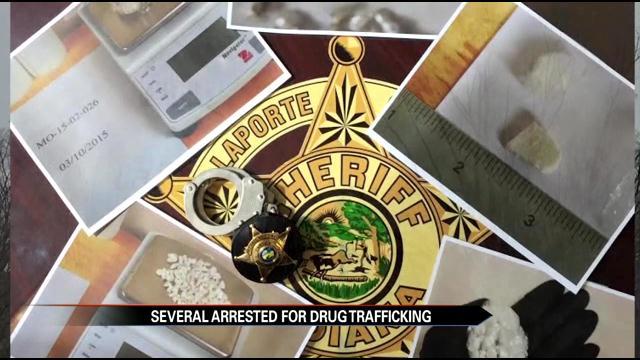 More than a dozen people are in custody following a major drug trafficking investigation in La Porte County.

Police said the 15 arrested are a part of an organization responsible for as much as 80-percent of the heroin and crack cocaine coming into La Porte County.

Police seized one hundred grams of heroin and crack cocaine combined, estimated at $10,000 and enough to service 1,000 users.

The commander of the La Porte Metro Drug Task Force continues to work undercover and did not want to be identified.

He said the drug organization responsible is based out of the southeast side of Chicago, and refer to themselves as the 109's, T3 Gang, and Kush Cowboys.

“They are glamorizing this with the individuals that they can make money. Especially the young males and females that are juveniles. They see this as a quick way to make money,” he said.

The primary method of transportation has been I-94, but police said these drug dealers have also been caught using the popular South Shore Train, getting off at the Michigan City exit.

Police do not believe drug dealers linked to this criminal organization go any further east than La Porte.

“Most of the intelligence and information we've received during this investigation shows this is the end point,” he explained.

Once in La Porte Police said the dealers set up “trap houses” – commonly a home of an addict, who exchanges the house for drugs.

Police said these drugs have become a major problem across La Porte. in 2014, 17 people died of heroin overdoses.

15 people have been arrested so far.

Police said they have identified another 10 to 15 people may be involved. Police believe this trafficking has been going on for at least three years.
Share this article: