15-Year-old falls out of tree stand 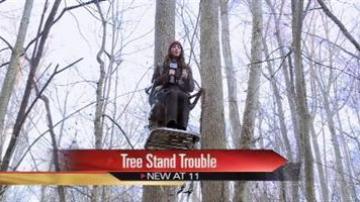 KOSCIUSKO COUNTY, Ind. --  A 15-year-old Warsaw boy had a scare with a tree stand.

On Saturday the Warsaw teen was coming down from a tree when he fell backwards and was hanging from his ankles 23 feet in the air.

Luckily another hunter heard the screams.

"An actual hunter who was coming out of the field had seen the individual with another hunter yelling and screaming and he had actually called it in,” said Cook.

After 35 minutes of being upside down, the conservation officers wrapped a line around the teen's torso, until the North Webster Fire Department brought a ladder to bring him down.

But one thing could have prevented this whole scary situation.

"This safety harness could save your life,” said Cook.

Cook said most people think hunting accidents involve guns, but he says that simply is not true.

"We usually get tree stand accidents and they are the No. 1 in the state,” said Cook.

Cook said these simple tips could be the difference between bagging a buck or spending big bucks in the emergency room.

"We were at elevations, mostly 10 feet and above and it can be very dangerous if you aren't thinking safety,” said Cook.

Cook says there are about 30 hunting accidents a year in Indiana and half of them involve tree stands.