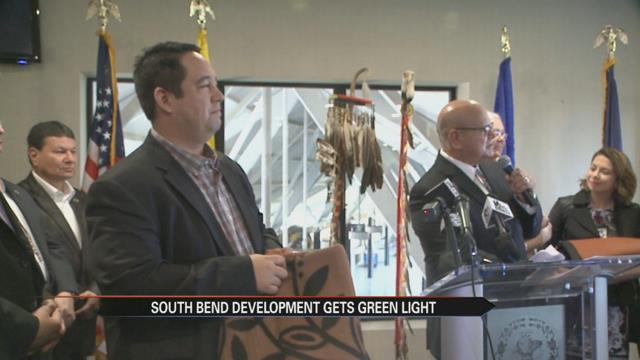 The Pokagon Band of Potawatomi Indians held a press conference Tuesday morning at Four Winds Field to announce the Bureau of Indian Affairs approved its application to place 165.81 acres of land in trust.

The Pokagon Band plans to use the land for a class III gaming facility, hotel and tribal village.

The Pokagon Band of Potawatomi Indians submitted the application in 2012. It was approved November 17, 2016.

According to the application, the land would be developed into an 18 story hotel with 500 rooms, 3,500 parking spaces in a mutli-level parking garage, 500 surface parking spaces, 44-housing units, governmental offices, educational facilities, health care services and a multipurpose facility to be used as a community gathering place.

“When you see the tourism that’s going to come in to the Southwest side, when you see what’s going on downtown, we've had a lot of work downtown now this is going to be work in a neighborhood in a Southwest section of a neighborhood its going to be development on the far west we have other development coming. We are here, this is exciting time for us and so I’m very thankful and grateful to all our neighbors who worked on this together," said Councilman Oliver Davis.

On Wednesday, the Pokagon Band wil break ground on construction for housing on Prairie Avenue.

The townhomes will be part of a Ttribal Village which will include 44 housing units.

A spokesperson for the Pokagon Band tells ABC 57 News says it’s part of a maximum potential development of 166 acres of land, which will include a casino that could cost 400 million dollars.