18-Year-old goes jogging and wakes up in hospital 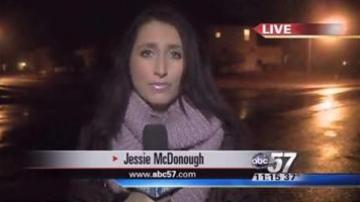 MISHAWAKA, IND.-- An 18-year-old when out for a jog Sunday in Mishawaka and ended up in the hospital.  The strange part is he doesn't know exactly why.

Christopher Johnson says he went out for a jog to clear his head around ten thirty and when he woke up, he was in the hospital with severe back pain and cuts and bruises on his face.

Emergency crews say they saw him lying on the side of the road and called for help.  Christopher Johnson had bruises and a neck brace, after Firefighters say a car hit him and took off.

"I have lacerations and cuts on my face and on my back", said Christopher Johnson.

According to firefighters a driver pulled over and called 911, after seeing Johnson lying on the road not moving.  Christopher says he started off jogging on Memorial road and when he woke up he was here at Memorial Hospital.

"I got told that since it is around Valentine's Day, that there a lot of drunk drivers and stuff out", said Johnson.

Johnson says there are a few other factors that could have lead to him getting hit.  There are barely any sidewalks on Harrison Road, even though there is an elementary school there.

"There were sidewalks on the left hand side but I was jogging on the right hand side", said Johnson.

And Johnson was wearing dark clothing, which he says was a big mistake

"Probably definitely wear light clothing, I know you can go out a buy a reflective vest", said Johnson.

The St. Joseph County Police still haven't found out who hit Johnson.  He says he hopes that person does come forward, but he isn't angry and he forgives whomever did it.

"One day they will have to answer for what they did wrong, but it is not my decision who they answer to", said Johnson.