19 Things Ivanka Trump wants you to know, per her new book 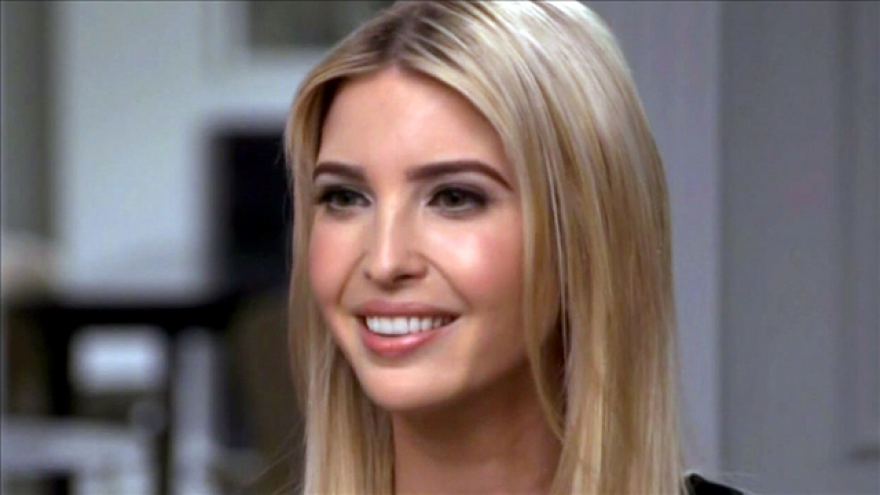 Written with the extensive use of a 19-page works cited, and inspirational quotes and stories from more than 130 people, including Oprah Winfrey, Colin Powell, Mindy Kaling, Maya Angelou, Sheryl Sandberg and Walt Disney, the tone is very on-brand for Trump.

The book also includes motivational quotes written in funky calligraphy on pale pink paper (paging Elle Woods -- no, they aren't scented) at the beginning of each chapter.

The first daughter wrote her guide before the November 2016 election, updating with a brief preface during the presidential transition time.

"Women Who Work" presents Trump, who now serves her father's administration as a top adviser, as a model working woman.

Here are some anecdotes and tidbits the image-conscious Trump offers up:

Her children call their grandmother "Glamma." The glamorous Ivana Trump, President Donald Trump's first wife and mother to Donald Jr., Ivanka and Eric, is described by her daughter as "a fashion icon, the consummate hostess and a lifelong entrepreneur."
She's a runner. "(I'm) striving to improve as a runner," writes Trump, who has been spotted jogging in Washington's Rock Creek Park.
She's a hard worker. "Anyone who knows me knows that I will outwork anyone," she says.
Husband Jared Kushner is a moderating force. "He's incredibly pragmatic, always cool in the face of adversity; he finds it unproductive to focus on the problem (versus the solution) or to react emotionally," she writes of Kushner. "He's my greatest teacher in this regard, the calm, soothing voice of reason that guides me to focus on what matters most, even in moments of crisis or chaos, where I naturally tend to be a bit more emotional."
She likes peonies. Trump encourages working women to get perspective on their lives and careers by looking from a point far in the future. Her imagined scenario is a milestone birthday. "I'm standing at the end of a long table, adorned with beautiful bouquets of blush-colored peonies, and seated on both sides are the people who've mattered most to me in my life."
She majored in real estate. Trump attended Georgetown University and transferred to the Wharton School at the University of Pennsylvania, where she majored in real estate and also studied finance and art history.
Arabella, 5, to join the family business? Trump insists it's up to her, but she worked on the Trump International DC Hotel with her daughter's future in mind. "I can envision Arabella overseeing this hotel someday (if she so chooses!), and I shared that with the selection committee," she says.
She's a reader. "I consume a tremendous amount of information: books, newspapers, trade publications, magazines," she lists. "TED Talks and podcasts are another way I diversify my own information bias and expose myself to bite-sized, snackable bits of information on topics."
2016 -- a "real eye-opener!" Trump -- who attended private school and enjoyed a NYC-centric adult life, discussed the importance of talking to people outside her bubble, citing her father's presidential campaign. "Having talked to people on both sides of the political aisle during my father's campaign for the presidency, I learned firsthand the importance of gathering and considering disparate viewpoints."
She and Jared are matchmakers. Trump discusses the importance of collecting contacts -- "My favorite personal example of this is how Jared and I have introduced seven couples who've gotten married. Seven! (We joke that our hidden talent is matchmaking, but that we don't give guarantees. So far, so good, no divorces!)"
She makes a lot of lists. Trump makes the time to write resolutions on New Year's Day. "I sit down alone with a notebook and headphones to brainstorm a long list of high-level objectives for each of the different businesses that I oversee," she writes. She also makes lists of personal and family resolutions. And she keeps daily and long-term to-do lists in a Moleskine notebook year-round. (Also, she says that her digital calendar is "color-coded by business and topic.")
Jared likes to walk. "Jared logs miles every Sunday by taking calls on his cell while pacing in circles in the living room or walking outdoors," she writes, citing research that walking boosts creativity.
She gardens. Trump bonds with her children while gardening at their New Jersey country home on weekends. "Berries are a big hit: strawberries and blueberries; we even have a peach tree and a fig bush."
She practices Transcendental Meditation. Trump has meditated for "several years," she says, "And I couldn't do half of what I do in a day without it." She says 20 minutes is ideal for clearing the head, but five minutes is "better than nothing!"
She used to guard her children on social media. Trump frequently posts images of her three children, 1, 3, and 5, on Instagram, but it wasn't always that way. "I didn't share a single picture of Arabella publicly until after her first birthday," adding that positive feedback on the behind-the-scenes images of her life encouraged her to post more frequently.
She gives her kids 'spa baths.' Trump talks about the importance of spending individual time with each of her children. "I've never really loved bath time," she writes, but, "I try to make it special for the kids. I like to give them 'spa baths,' where I run the shower for steam, play rainforest music on Spotify, lower the lights, and let them add bubble bath to the water. They get a kick out of it and it makes it more fun for us all."
She likes Bravo's 'Real Housewives.' Trump acknowledges that "Sometimes I like turning on 'Real Housewives' and sitting in front of the TV eating a giant bowl of pasta with a glass of wine, but if I'm honest with myself, it's kind of counterproductive," she writes, adding that those times are good for meditation or exercise.
She gets real about breastfeeding. "One of the hardest things about returning to work is trying to continue breastfeeding and watching your milk supply plummet," she says, which "made me feel like an awful parent." She said she's cut herself some slack since her first child.
Her mother-in-law brings the snacks. Trump's mother-in-law, Jared Kushner's mom, Seryl, kept employees at her eponymous apparel and accessories brand well-fed. "I stock the fridge with healthy snacks (thanks to my awesome mother-in-law, who does grocery runs for us!)," Trump writes. She has since taken a formal leave of absence from Ivanka Trump.